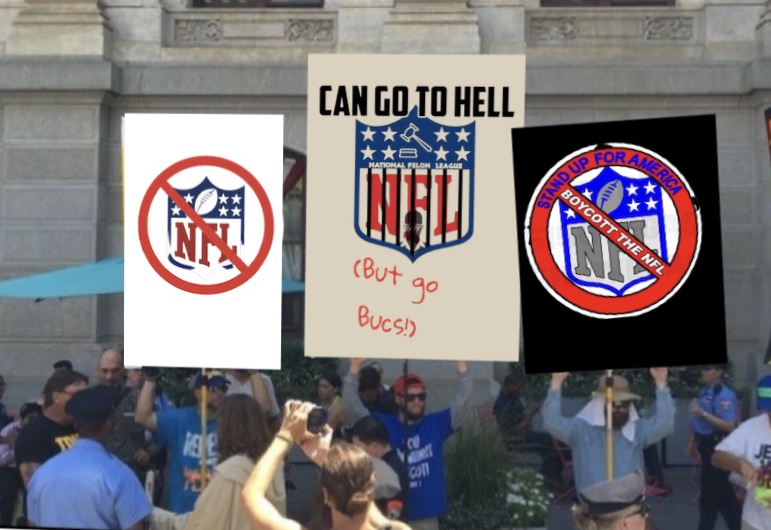 As the Tampa Bay Buccaneers prepare for their home opener against the Carolina Panthers later today, people boycotting the NFL are planning to intensify their efforts.

“We’re longtime football fans but the NFL has betrayed us by supporting the Black Lives Matter thug movement and we are committed to making a statement to let them know how we feel about that”, says Charlie Fleaburn of West Tampa. “Of course we had to watch Brady’s debut with the Bucs last week. But we’re through with these spoiled millionaire traitors now.”

According to Nielsen Media Research, the FOX network telecast of the Buccaneers-Saints season-opening game last Sunday drew an average audience of 25.85 million, an increase of 7% from last season’s game in the same slot, which had an average of 24.22 million viewers. FOX said it was the most-watched telecast of any kind, since Super Bowl LIV in February, between the Kansas City Chiefs and San Francisco 49ers.

Phil Ducker of St. Petersburg says, “I’ll be completely honest, choosing to boycott the league is a pretty easy decision now, following that performance against the Saints last week. In the weeks leading up to the season, I probably wouldn’t have made that decision, but now, after Brady went 23-for-36 with two interceptions, including a pick-six, my morals have kicked in and it’s really just the right thing to do.”

“I love the NFL and I’m gonna miss it but not as much as they’re gonna miss my support”, says Andrew Hitchel of Clearwater. “I’m the kind of superfan who would get rowdy, paint my face, wear all the fan gear and go to every single home game if I ever bought tickets to any games.”

“Black Lives Matter is obviously an inherently racist movement, philosophy, whatever you want to call it”, says Margaret Bloogh of Temple Terrace. “I’m not black so it’s racist against me specifically. There are millions of memes that back me up on that. It’s just like when Spanish-speaking people speak Spanish around me because I don’t speak Spanish. RACIST!!”

Tommy Rublis of Pinellas Park says, “The bottom line is there’s no place for politics or social issues in sports. They’re paid to play, period. I just want the players to shut their mouths, play the games and spend their money on those poor ghetto kids I never worry about. Why can’t these guys be more like the great sports heroes of the past like Jim Brown, Arthur Ashe, Jackie Robinson and Muhammad Ali?”

“You can’t expect me to support people who disrespect our flag and the troops who have risked everything to defend it,” says Micheal Shuffer of Brandon. “I can’t imagine how pissed off I’d be if I had ever been a troops.”

The game kicks off at 1pm and when asked if they planned to show up at Raymond James Stadium to make their statement visible, they all said they would be too busy dealing with “a thing” that totally has nothing to do with watching it on TV.