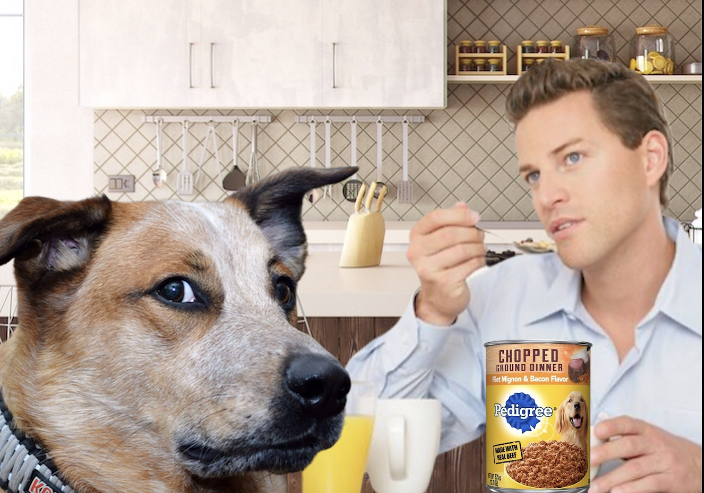 Brandon Salazar of Carrollwood has wanted his not-quite-secret desire to eat dog food to be socially acceptable for a long time and believes that increasingly desperate attempts to deal with the ongoing COVID-19 pandemic might finally make that possible.

“Hear me out; dogs can’t get The ‘Rona, right? And what do dogs eat? Dog food,” he says in a self-satisfied manner. “I think there’s something to that. It’s worth checking out is all I’m trying to say.”

Salazar says he’s done more than superficial research on the matter. “Dog food is designed to be nutritious. It’s filled with protein and zinc and nitrium and vitamin C,” he says. “I spend a lot of time watching dogs. A lot of time. I study them. I see them eating their food. I see them living carefree happy lives. They’re doing something right.”

He believes that dogs themselves would support him and his beliefs. “Dogs are man’s best friend. Is it beyond the realm of possibility that they could save mankind from this plague with their presumably delicious food? I think they would want that for us.”

Mr. Wiggles, a chihuahua in VM Ybor speaking on behalf of dogs everywhere commented, “Man, we can’t have anything of our own!”

Salazar’s friend Mike Humming says Salazar’s desire to eat dog food is basically a life-long obsession. “He’s been talking about wanting to eat dog food since I met him and we grew up together. It’s got nothing to do with the Coronavirus. Dude has some seriously twisted ideas. This is all just a new angle to try to get sane people on board with mainstreaming his crazy fetish.”

Salazar says that’s not true. “That’s ridiculous. Who in their right mind would want to eat dog food? That’s gross, right?”, he asks, chuckling self-consciously before immediately offering a possible answer. “I mean, it is chunks of beef and/or chicken in a rich, hearty gravy. What about that doesn’t sound good?”

Salazar isn’t bothered by the criticism he receives from his friends and family. “Visionaries are always misunderstood. This virus has stumped everyone so far. Nothing should be off the table, especially alternative medical options. So-called mainstream science sure hasn’t told us anything.” I point out that medical professionals and scientists have determined that certain steps, such as practicing good hygiene, observing social distancing standards and wearing face coverings have proven effective in combatting the spread of the virus. “Yeah, a lot of good that’s done,” he scoffs. “The only virus that’s killed is the freedom virus, and I want that one inside of me!”

Humming countered Salazar’s bizarre assertions with an even more seemingly absurd hypothesis. “My dog eats the clinkers from the cat’s litter box. Maybe that’s the real secret. Maybe we should all be chowing down on gravel-encrusted cat turds,” he says. “Jesus, Brandon. Just eat some Alpo and get it over with already.”