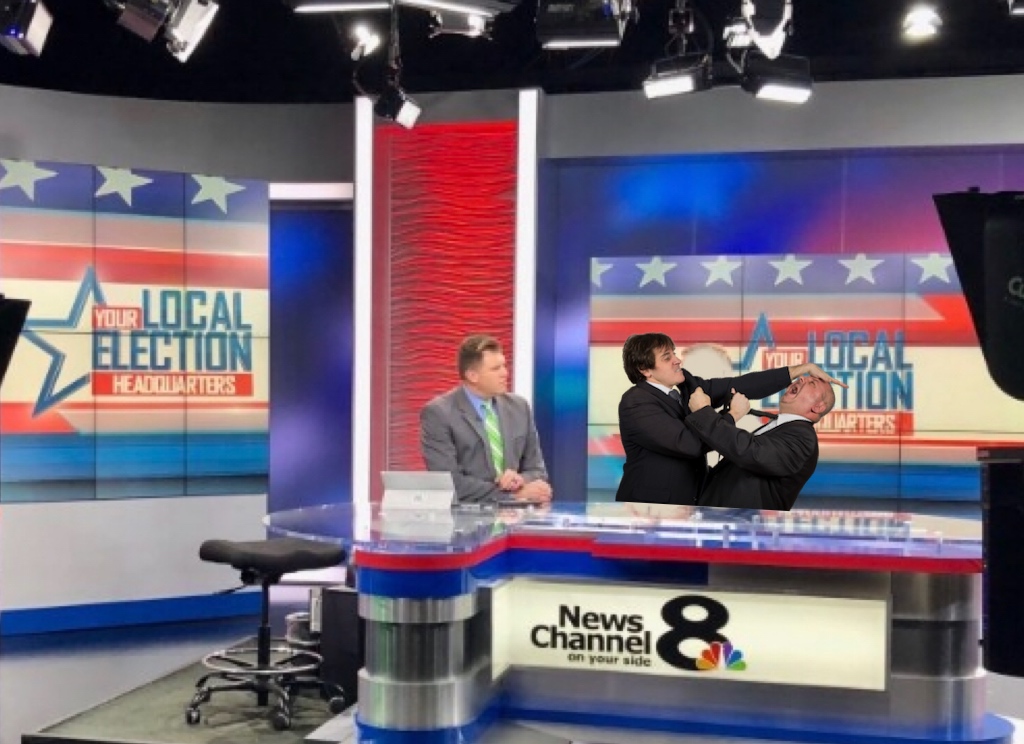 Tampa Bay’s local NBC television affiliate WFLA (News Channel 8) has devoted their election coverage to a couple of men in suits fighting each other.

“We feel that this is the best and most accurate depiction of this year’s election”, says news programming director Sylvia Wyngooop. “Viewers can tune in at any time tonight and we’ll provide up to the minute poll results for all the races taking place locally and nationally that they expect. That will be presented in a scrolling ticker across the bottom of the screen while these two clowns just go at it.”

She says that the station has given a majority of reporting staff the night off. “Sure, we could have our news team filing up-to-the-minute coverage, being 8 On Your Side like viewers have come to expect, but we respect our staff too much to make them wallow in this quagmire.”

The two fighting men are unidentified and Wyngooop says they were chosen from a handful of respondents to a Craigslist ad. “It’s important that people understand that this isn’t some unfortunate melee that broke out between a couple of pundits over some emotional, contentious exchange. These are just men who like to fight and we planned this.”

“They’re being paid in food – we ordered a couple of pizzas – and they’ll get to keep the suits when they’re finished,” she explained. “The only stipulation is they can’t tap out early. They have to see this through to the end of the evening’s broadcast, regardless of how much physical and emotional damage they inflict and incur, just like the two noble and dignified candidates competing for the privilege of serving as the nation’s top public servant. Excuse me,” she said as threw up violently. “Sorry. I’ve been rehearsing that last line all day and I just can’t say it without reacting.”

Neither of the men is intended to symbolize any particular candidates, parties or issues. “What difference does that make at this point?”, says Wyngooop. “This is just a brawl for the sake of brawling. Pick one as your favorite and root him on. Maybe you like the color of one’s tie or you hate the expression on his face. Make one Biden and the other Trump. Or Christine Quinn and Kathy Castor. Or one is ‘yes’ and the other one is ‘no’ on the various amendments. Change your mind if you feel like it. Who cares? It doesn’t matter. Mix and match them and have fun with it! We’re really proud of how accurately representative of the political climate this is.”