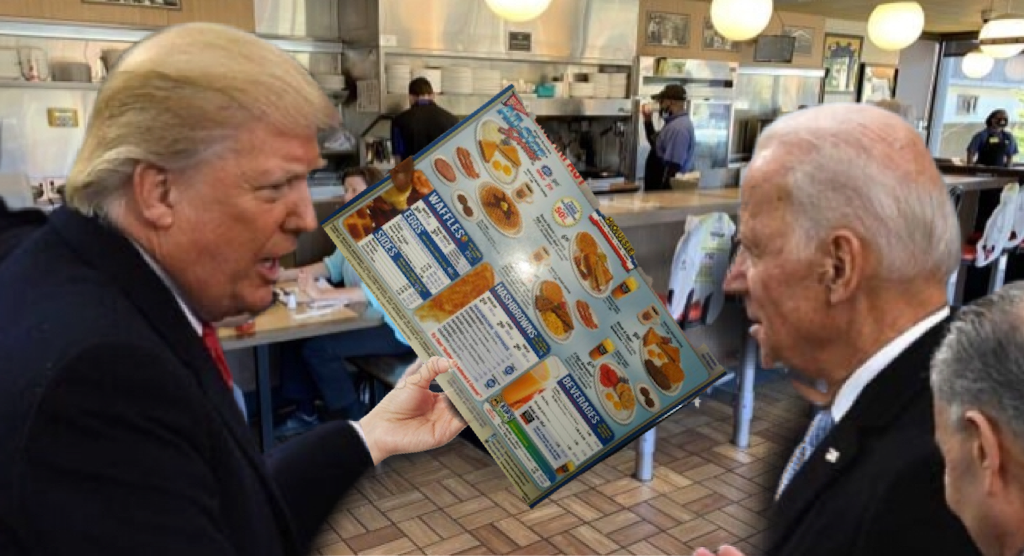 In a historically unprecedented move, as well as an uncharacteristic display of cooperation in this highly contentious election campaign, the two presidential candidates, Republican incumbent Donald Trump and Democrat challenger Joe Biden, have worked out a mutually beneficial deal mere hours before the polls close nationwide.

At an accidental breakfast meeting at the Waffle House on Hillsborough Avenue in Tampa this morning, the two candidates happened to cross paths and the initial interaction was extremely awkward.

Biden greeted Trump, saying, “Oh hi, Donald”, to which Trump replied, “What’s up, Joe”, with both men staring at the floor and shuffling their feet. Biden attempted to engage his rival in small talk. “Hey, the hash browns here sure are good, aren’t they?”, he said, prompting Trump to answer, “Fuck you, Joe. I mean, yeah, they really are delicious. But still; fuck you.”

At that point both men started arguing and exchanging deeply personal insults about each other’s parents, prompting patrons to either leave hastily or take out their phones and record the rapidly-escalating skirmish.

At that point, a server named Donna commented to Ralph the line cook, “Jesus, I’m so sick of this political bickering. I wish somebody would blast both of these assholes into space and shut them up for good, for everyone’s sake.” She was immediately tackled and taken into custody by Secret Service agents who, along with everyone in the restaurant, overheard the aside. Trump and Biden both stopped in mid sentence and locked eyes, before Trump said, “You know what…?” and Biden nodded, answering, “I think I know where you’re headed with this.”

With that, both men sat down in a booth and hammered out the details of an agreement that will see the loser of the election, whomever that eventually happens to be, along with everyone who voted for them or supported them with yard signs, vehicle flags or other obnoxious displays, loaded into rockets and fired off in the general direction of the moon, without food, water or the means to ever return to Earth.

Trump said, “After these ANTIFA BLM libtards are sent off to die cold and alone in outer space, America will TRULY be great again! Of course, I’m not going to lose so it was easy for me to agree to the mutual terms of this deal.”

Biden commented, “When, not if, he loses, and he and his sycophantic cult of intolerant bigots are no longer here to impede our progress as a nation, our four-year waking nightmare will finally be over.”

Both men concluded their remarks with the identically worded statement, “Either way, this is an unqualified win for the American people.”

Beginning Thursday morning, after being given an opportunity to say good-bye to the small handful (if any) of friends and family members they leave behind, the losers, or as they will be known going forward, ‘Next and Last Generation Space Patriots’, will be gathered, loaded into trucks and driven to the Kennedy Space Center in Brevard County, processed and fired off into the icy void of the cosmos.

Trump and Biden completed the agreement by shaking hands and then making faces behind each others back. They then ordered a breakfast of two eggs over medium with bacon and hash browns scattered, smothered and covered. Trump ordered white toast with butter only and Biden ordered whole wheat toast with mixed fruit jelly. Both men muttered, “typical” under their breath and then ate in sullen silence.

← Tampa woman votes, announces, “That should do it”Channel 8 election coverage is just two guys beating the shit out of each other →