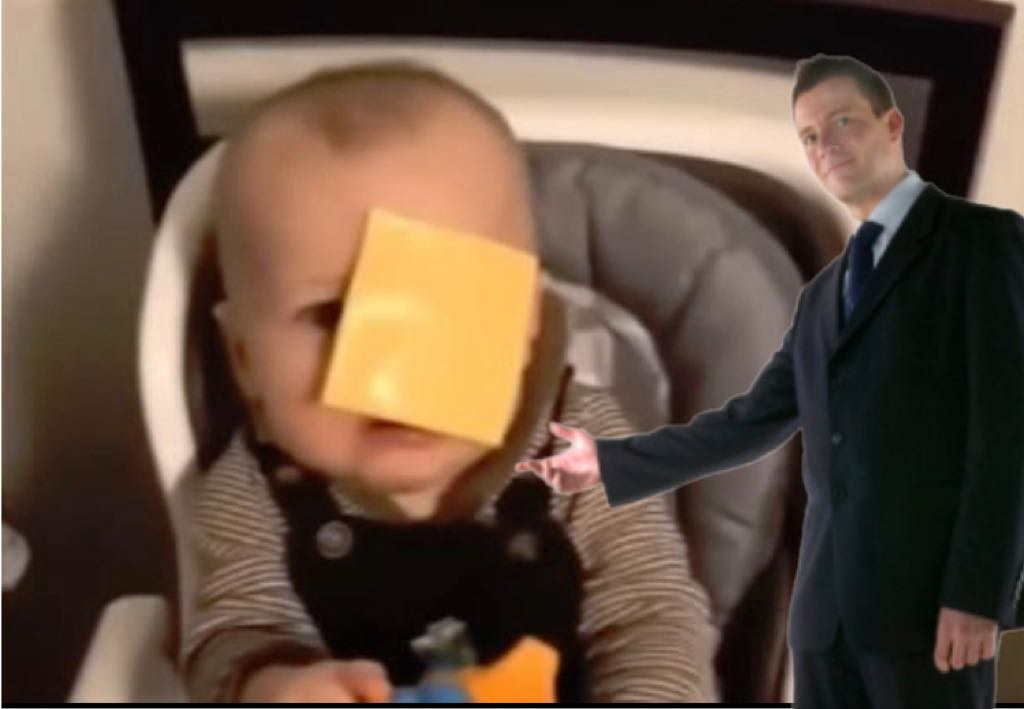 Three-year-old Chase Champlain of Tampa has hired a lawyer in order to sue his parents for physical and emotional damage he suffered in 2019 as a result of the ‘Cheese Challenge’ social media trend.

“I had to suffer with this in silence for a long time because I couldn’t talk,” Chamberlain said. “Now that my vocabulary has strengthened and I’m able to communicate more effectively, it’s time to address this matter.”

Cheese Challenge, also known as the Cheese Slap or simply Cheesing, is a prank in which participants take a slice of cheese and slap a person or animal in the face with it. Often human babies, because they can’t fight back.

“Yes, exactly,” said Champlain. “I was made a victim of this heartless cruelty simply because I lacked the ability to resist.”

The reactions of the victim, ranging from anger to confusion to amusement, is usually captured on video and then shared on social media platforms like TikTok, Instagram and Twitter.

“And that’s where the real harm comes from,” he said. “The physical discomfort was minimal; I barely remember it. But the video is going to be on the internet forever, to my chagrin. When I ask a date to the prom, when I apply to college, when I meet someone with whom I have a romantic interest, when I seek employment: it’s going to be, ‘hey aren’t you the cheese face baby?’ My life is already predetermined to be a nightmare through no fault whatsoever of my own! It’s this emotional pain that is going to scar me forever.”

“Robert and Susan (his parents) need to pay me $2 million in punitive damages and no less than $2 million in compensatory damages,” he said. “Justice must be served to address this egregious affront!”

“Me get Chase big settlement, make mommy and daddy paychecks go bye-bye,” said Champlain’s lawyer before starting to cry hysterically for seemingly no reason, stopping only when Champlain jingled a set of keys.