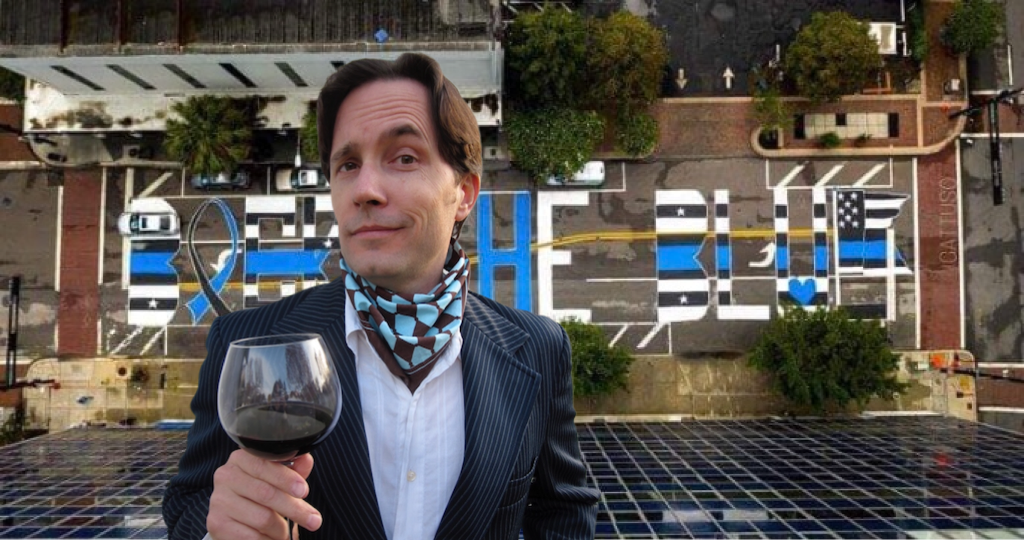 The highly controversial, pro-police, illegally painted “Back The Blue” street mural has been sold to a wealthy French art collector.

“Please, please, please. My friends call me JP”, he said, introducing himself to local media at a press conference in front of Tampa City Hall after completing the transaction. “Do not call me that.”

“The reason I am buying this piece is because regardless of artistic merit, or lack thereof, it is undeniably the most talked about and culturally important contemporary artwork in America right now. And as such, I must have it”, he said. “Being as you are all uncultured, meth-addled swine-apes, I don’t expect any of you to understand, which is another reason why I want it so badly.”

Included in the purchase price is the arduous task of somehow removing the approximately 900’ x 60’ slab of asphalt in one piece and finding a way of shipping it to France, followed by repaving and striping the 300 block of East Madison Street, where the mural is currently located. The work will take months to complete, after which the City of Tampa is expected to net around $28.50.

“Whatever. My hope is that people can finally stop fighting about painting streets and other ultimately empty symbolic statements so they can focus attention on actual issues that need immediate attention,” says Mayor Castor. “We all need to realize there isn’t always going to be some idiot from out of town with more money than taste to bail us out of these increasingly ridiculous situations.”