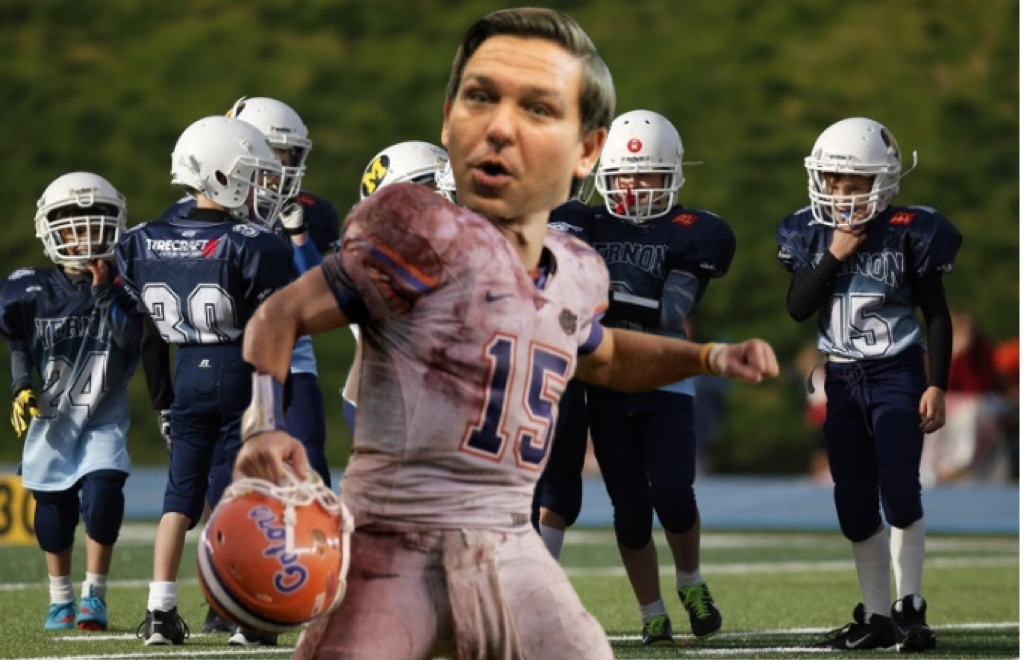 As the NCAA and various major collegiate athletic conferences struggle with the decision whether or not to cancel, pause or postpone their fall sports programs, Florida Governor Ron DeSantis promises that college football will be played in the state in 2020.

“By all that is holy, I swear to you here and now that the great game of college football will be played in Florida this year”, he said, while dressed in a complete Tim Tebow Florida Gators uniform at a press conference at Raymond James Stadium in Tampa.

“I have taken a lot of blame for things that were totally not my fault. Well, I’ll tell you one damn thing for sure: Florida vs Florida State is the greatest rivalry in college football and I will not be the president under whose term that grand tradition comes to an end”, he continued. “Did I say ‘president’? Oops. Governor. I meant governor.”

Governor DeSantis was unwilling to comment on the prospect of all schools playing their full schedules but committed firmly to the UF – FSU game happening.

When one journalist in attendance asked specifically about the annual Florida Classic, which pits historic black institutions Bethune-Cookman College against Florida A&M University, he was escorted hastily from the room.

DeSantis went on to say, “I’m not sure you media types realize how committed to this I am. I’m so serious that I will get out there and play the damn game myself if I have to. And here’s a little demonstration to serve as proof of that…”

With that, he introduced the North Tampa Mini-Mite Peanut Nuggets, a team of 8-year-olds participating in their first season of tackle football. “These scamps are healthy enough to go to school, they ought to be healthy enough to play a game of football against an old man like me”, he said, with a self-effacing chuckle.

He then instructed the youth players to take up a defensive formation across from him. “Okay, I’m the Gators and you guys are the ‘Noles. Got it?”, he said. Young linebacker Josh Smith shouted back, “I hate the Seminoles and the Gators! I wanna be the Hurricanes!”, to which DeSantis replied, “YOU’LL BE THE SEMINOLES AND LIKE IT OR I’LL SEE TO IT YOUR PARENTS ARE BOTH DRAFTED AND SENT TO IRAQ!!” This response startled free safety Zach Kinney, who started to cry and ran over to his mom.

Ignoring the childish reaction to unreasonable adult-inflicted psychological trauma, DeSantis said, “All right, I’m going to hike the ball to myself. Then I’m going to throw it up in the air and catch it and run for a touchdown. You try to stop me. Ready? Hut one…”

Before the snap happened, the kids, brand new to the game and not completely well-versed in the rules, all went offsides and swarmed the governor, with Smith finishing the illegal quarterback sack by punching DeSantis in the crotch.

As the governor writhed in pain on the Raymond James Stadium turf, Smith stood over him, splaying his palms and touching his thumbs together to form a ‘U’ and said, “Cup check, bitch.”