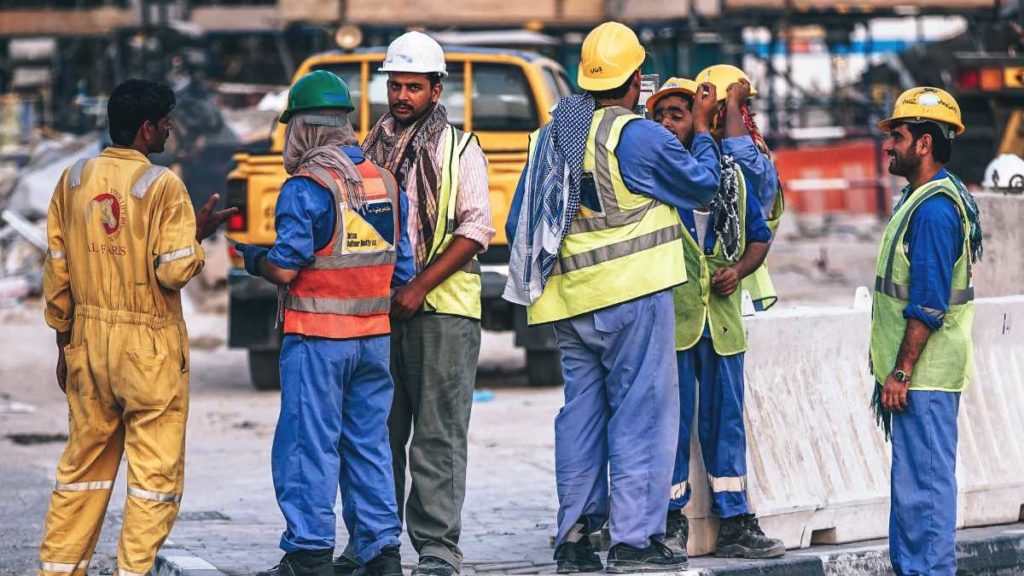 Members of a newly assembled road construction crew working in Tampa Heights are struggling to decide who should stand where and how when passing time, doing nothing.

Andy, Ernie, Hector, Julio, Mike and Phil were recently assigned to build some sort of bigger, sturdier, concrete curb obstruction island deal at the intersection of North Highland Avenue and West Violet Street because, and this part of the article is 100% factual, distracted drivers keep blowing the stop sign and crashing into the house at 4820 N. Highland, freaking out the people who live there and making their home look like this:

They’re all veteran road construction workers used to standing around as cars drive by wondering what work, if any, ever takes place, but have never stood around idly on the same crew before. As a result, they’re having some trouble figuring out each other’s standing-around preferences.

“It’s like assembling a jazz combo,” says Mike. “If you’re trumpet player is accustomed to taking his solo at a certain spot but I’m used to taking my trombone solo at that same spot, that’s a not cool. Same as if I’m going over there and leaning against a light pole but that guy’s thing is also leaning against that same pole, it’s not going to work. What I’m saying is that standing around a job site is an art form. Like playing jazz, baby.”

It’s expected that the members of the crew may have to make changes and adapt, but that may not be as simple as it sounds. “I’ve been on the job for 33 years,” says Andy. “Everybody knows my thing is left hand on hip, right hand holding a Styrofoam cup of coffee and either nodding or shaking my head. Ask anybody! That’s been my thing for years and if one of these other sons-of-bitches think that they’re gonna take it from me, then we’re gonna have a problem.”

I went over to Julio who had his left hand on his hip while holding a Styrofoam cup of coffee in his right, alternately nodding and shaking his head and I told him what Andy said in order to stir up some conflict. Julio replied with something in Spanish that I couldn’t understand but I think it was probably something like, “Screw that guy,” so I expect those two to be involved in a fist fight by lunch time.

“Mike was right about it being like putting a jazz band together. Or maybe a basketball team,” says crew foreman Phil. “It’s all just a matter of spending time with one another, learning each other’s moves and developing a comfort level and confidence in one another. Look how we’re all just standing around doing absolutely nothing already! Not one of us has even taken a shovel out of the truck yet. That’s a great sign. I have a real good feeling about these guys. We’ll get there, no doubt.” He took a sip of coffee, nodded his head and said, “We’ll get there.”