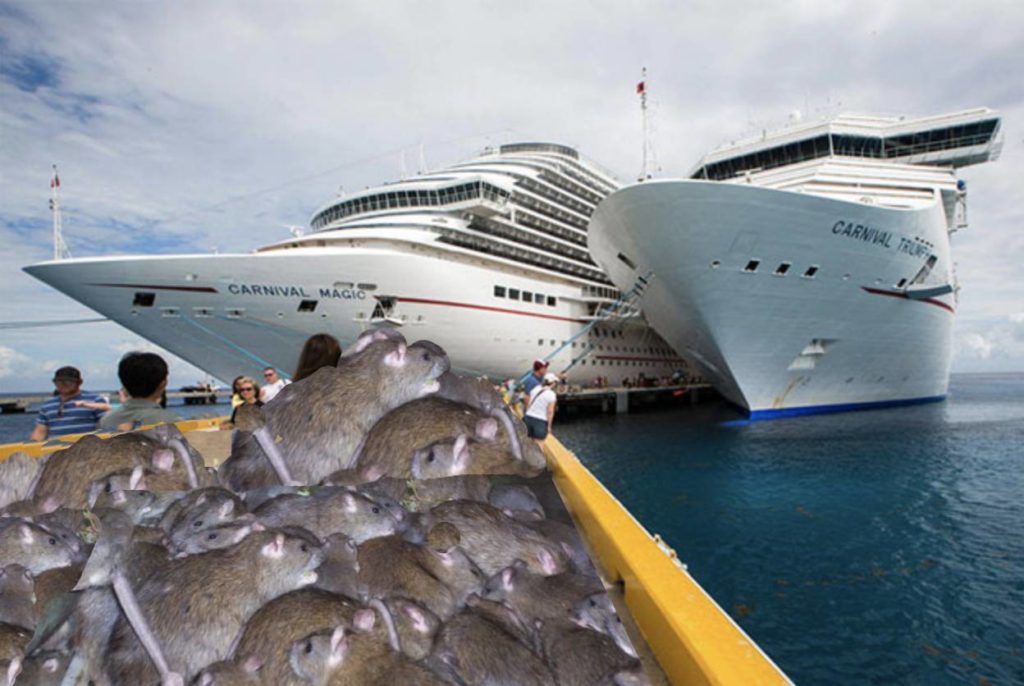 Tampa General Hospital hits unsafe occupancy levels due to hundreds of cases of herpes-infected bite-wounds this week, shortly after the return of the MS Carnival Magic from a week long “booze-cruise” to the Caribbean.

“We’re totally unprepared for this sort of thing,” a Tampa General nurse, Alicia McMeirdes complains from a hospital bed, “One minute I’m out smoking on my break, the next I’m attacked by an infected sea rat. It’s face was so puffy and infected, I couldn’t tell if it bit me with it’s mouth or it’s ass!”

Although unusual to those of us on land, the US Coast Guard census statistics revealed that herpes infection is quite common at sea, with 37% off all at-sea deaths resulting from the disease, second only to being thrown off-board into a propeller (43%), and followed by accidents occurring from attempting to “fuck the gap” between water-tight doors (20%).

Carnival Corporate, the Cruise Director, and the Captain all refused to comment. However, Ashley McDermot, Lounge Singer on the MS Miracle was able to give an insider’s view on the plight of the infected.

“I probably contracted herpes my first week on-board,” Ashley reminisces, “Not by a rat, but probably from someone in entertainment… or that dishwasher. Anyways, people just get bored after a while. On a contract of 6 months or more…pretty much run out of new people to fuck. So a lot of us start to get creative with partners. You could see how the rats could get involved.”

After being asked if she could’ve been Patient Zero for the rats on board, Ashley simply shrugged and stated, “Eh, if it wasn’t me, it was the drummer,” and went back on stage to start her seventh set of the day.

View all posts by Lauren Lance →