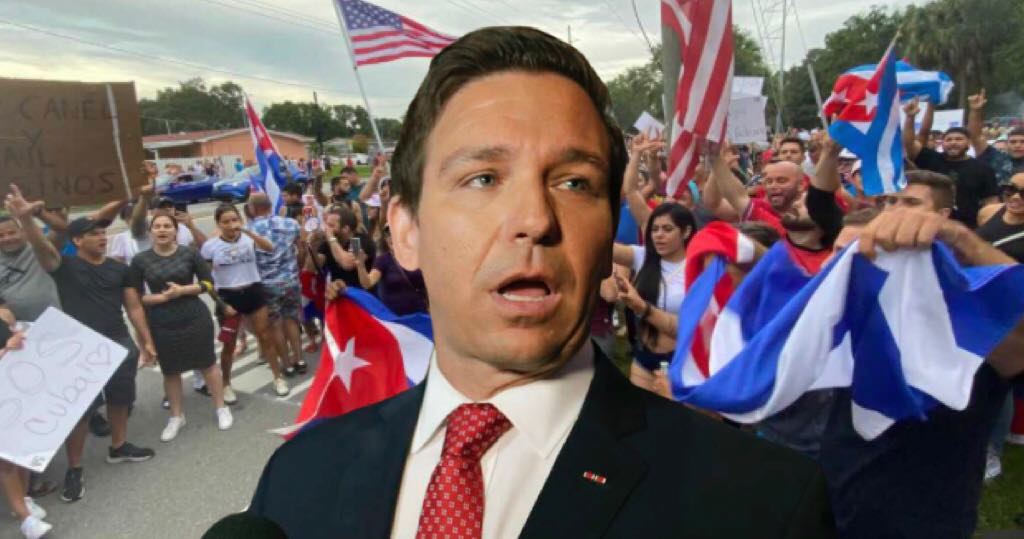 Florida Governor Ron DeSantis visited Tampa recently to view, from a safe distance, the #SOSCuba demonstrations that have been taking place recently and took the opportunity to address what have been seen as inconsistencies in the enforcement of HB 1, the so-called anti riot bill he signed into law this past April.

“The people understand the difference between peaceably assembling, which is obviously, people’s constitutional right, and attacking other people or burning down buildings or dragging people out of a car,” DeSantis said. “This deal here with the Cubans and last year with Black Lives Matter (BLM)? They’re much different situations.”

Asked to elaborate, he said, “Okay, well, first of all, what you’ve got here now is a people who feel that they have been underrepresented and oppressed by an unjust system for a very long time and they’re fed up. Where with BLM, that was… um, well… that was something else entirely. That was a whole other thing. Because, we didn’t like that.”

He paused to gather his thoughts before continuing.

“All right, how about this? BLM demonstrations were actual full-blown riots with a blatant disregard for the welfare and safety of law enforcement authorities”, he said. “What we’re seeing here are totally peaceful gatherings of people voicing their opinions.”

Last Tuesday in Tampa, protesters closed-off a ramp from Interstate 275 at Mabry Highway by gathering in an intersection, while others blocked the northbound lane of Mabry by kneeling on a Cuban flag. A Florida Highway Patrol trooper suffered a broken ankle along with lacerations to his arms and face while assisting Tampa officers during an arrest.

“Okay, that does sound kind of the same”, said DeSantis. “But people need to realize that there are only a few black Cuban people and all of them are baseball players and we love baseball players because baseball represents everything good about America. I don’t know why I think any of that’s true or why it would matter but it’s important for some reason.”

“The point is, they’re not uppity”, he added. “I probably shouldn’t have said most of this aloud, especially those last couple of things, but it will play well with my base so I’m cool with it.”

← Best Things to Do on Nebraska Avenue TampaBREAKING: Guy Has Sex →