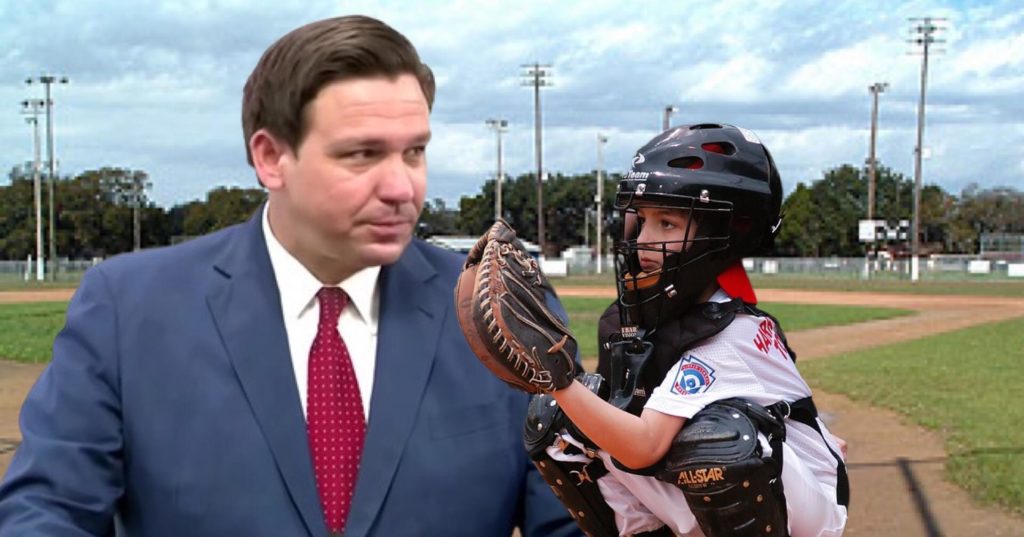 A visibly annoyed Florida Gov. Ron DeSantis admonished a catcher for the West Tampa All-Stars on Saturday for wearing a protective cup prior to a Little League game.

DeSantis was in town to throw out the ceremonial first pitch prior to the game, when he noticed a bulge in the pants of 8-year-old Adam Tweedler who was positioned behind home plate to receive the pitch.

“You do not have to wear that cup. I mean, please take it off. Honestly, it’s not doing anything. We’ve got to stop with this penis theater. So if you wanna wear it, fine, but this is ridiculous,” he said, letting out an audible sigh and shaking his head.

Tweedler seemed confused by the admonishment and said later, “Sure, I’m at least three or four years from puberty but getting hit in the junk still hurts. I’m not taking it off, and definitely not on the field before a game with my parents and grandparents and everybody in the stands.”

“I don’t see why he would care. He’s not the one squatting behind home plate and fending off errant fastballs and foul tips,” he added. “Plus, why was he even looking at that?”

After yelling at Tweedler, DeSantis stood several feet in front of the mound and threw a pitch that bounced twice and went wide of the plate by at least four feet.