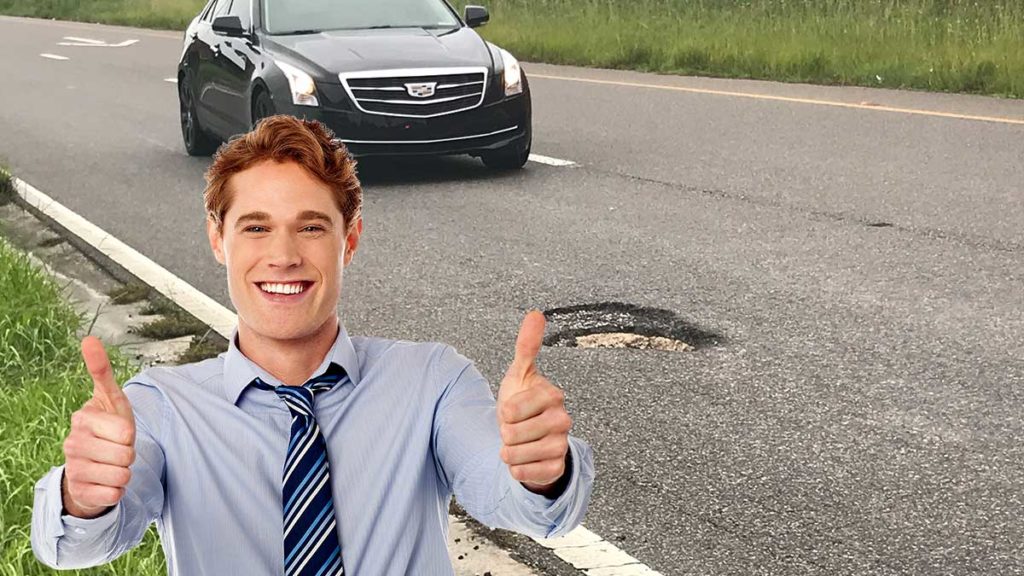 Roger Gnudtke, a salesman for Hindercapable Inc. is having yet another record breaking sales year. “When the company first assigned me the downtown Tampa territory, I didn’t have very high hopes. Mostly because nobody lived there and all the businesses closed at 5 PM,”, says Gnudtke. “But shortly after that, a couple condo towers were built and some bars and restaurants came along and now things are boomin’ baby!”

Hindercapable Inc. is a company that sells and installs obstacles and impediments that make it difficult for people with mobility issues to get around. “Actually, we don’t discriminate. We make it difficult for EVERYONE to get around,” said southeast regional vice-president Dooley Soufmire, as he saluted an American flag and shotgunned a room-temperature Budweiser. “Not just the good ol’ reliable stumbly-wumblies who are our bread and butter. Roger is killin’ it down there in Tampa. My man!”

When asked what beneficial purpose a company like Hindercapable Inc. could possibly serve, Soufmire said, “It’s like any classic dichotomy where one entity is perceived as the dualistic, antagonistic opposite of another, in which neither can exist without the other. Think Batman and his arch-nemesis The Joker. Some companies manufacture wheelchairs, handrails, crutches, ramps, walkers, canes and such, all in an effort to help disabled people live meaningful, productive lives and feel good about themselves for being able to accomplish things with less difficulty. Then there’s us.”

“It’s true,” says Ryan Kindperson, owner of Canes & Such, a company that manufactures mobility aids. “Our work is rewarding in itself, but as much as I hate to admit it, those bastards over there push us to be even better. They truly are loathsome human garbage but they provide an excellent source of motivation.”

Roger stands to collect maximum bonuses yet again this year, for his efforts in keeping downtown Tampa a pedestrian’s nightmare. “First of all, it’s great that the people who run downtown keep renewing our contract to constantly  un-even the sidewalks and road surfaces and raise and lower the curbs indiscriminately. I like to say we break more ankles than Alan Iverson! Ha ha! Secondly, they buy cases and cases of those bags that are put over the signs at metered parking spots along the streets for no apparent reason. The mark-up on those things is tremendous! Third, the damage being done to these e-scooter riders has turned out to be an unexpected source of new revenue for everyone in the industry!” He said as he hopped up and down and clapped his hands.

Kindperson sighed sadly and said, “That last part is also true. Roger Gnudtke is a deplorable human being but a heck of a salesman. This is going to be a good year for us too.”

When asked what he plans to buy with his exorbitant sales bonus, he said, “A jet ski, definitely!” Which Kindperson will then crash into some rocks near the Courtney Campbell Causeway, resulting in him spending the rest of his life in a wheelchair.