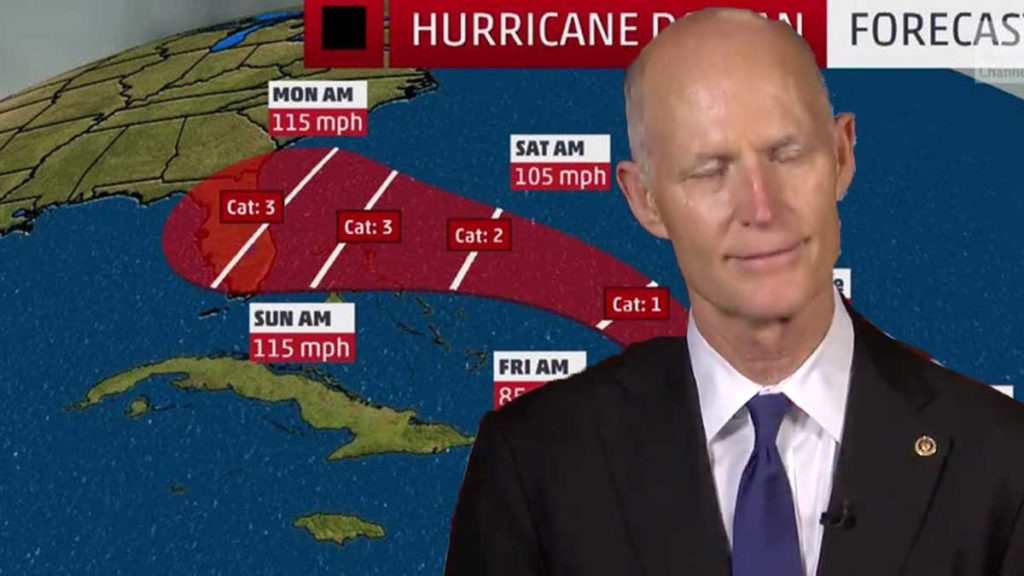 Florida Senator Rick Scott spent much of the past few days praying for the upcoming Hurricane Dorian to gather enough strength and drown every poor person in its path.

“As governor of Florida, I made sure every poor person worked even harder than they had to if they wanted the dollars,” said Senator Scott, still with his eyes closed and deep in prayer.

I tried to ask him a question, but his assistant hushed me and handed me a brochure explaining that the Senator was in a deep marathon prayer and would occasionally say part of the prayer out loud.

“I have been trained to stop any possible disruption that would cause the Senator to restart his prayer,” whispered the assistant to me.

“What if I chug this Bud Light and burp real loud?” I asked the assistant while pulling out a can of room temperature beer from my jacket.

“Well certainly you can’t be serious…JESUS CHRIST!” the assistant said before I cracked open the can of beer, causing it to excessively foam and spray everywhere. At that moment, Scott made a noise almost like he had been disturbed, causing the assistant and I to stare at him in anticipation before he continued with his prayer.

As his assistant breathed a sigh of relief, I farted really loud, crapping my pants in the process.

“Oh no!” I said in embarrassment while pulling my pants down. “Can you change me please?” I asked the assistant in a high-pitched baby voice.

The assistant looked at me disgusted and wondered how Scott could continue praying through the scenario that was unfolding in his office.   I continued yelling in the baby voice, “You gotta change me please!  Or else I’m going to cry and that is definitely going to wake up the Senator.”

“He’s not sleeping you fool, he’s praying!” Said the assistant in an animated manner before looking over to see that Rick Scott was no longer there.

I cleaned myself up with some random objects I found in the office and fashioned myself a pair of underwear from the undershirt I was wearing.

“Did the Senator have an appointment or something?” I asked the assistant.

“Honestly this is my first day here,” said the assistant while he watched as I scavenged around the office.

“Any snacks in here?” I asked the assistant.

“There’s probably some granola in the break room, but the Senator really only eats live mice and whatever bugs are around him.” The assistant was anxiously nibbling at the tips of his fingers and I could tell he was starting to get uncomfortable.

“Well I can see that I’m making you uncomfortable, so I should get going,” I said while shoving random office supplies into a cardboard box I found.  “If you see Ricky, let him know that it’s kind of weird that he serves on the committees that regulate the industries that he has a financial stake in.”

“Oh he is aware of all that, and he doesn’t care that you all know that he is making millions of dollars while screwing over taxpayers.” The assistant said before escorting me out of the building.

No word yet on whether God will listen to Rick Scott.