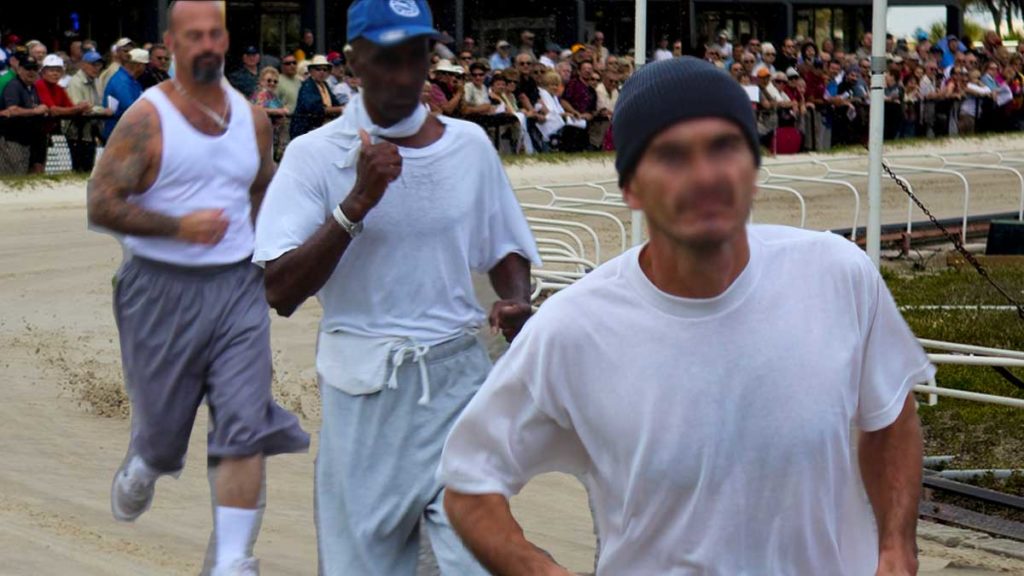 Derby Lane, has officially replaced all racing dogs with Florida inmates as part of a new program aiming to rehabilitate prisoners through the act of shame and embarrassment. PETA and other animal rights groups have petitioned and protested for years to stop dog races as it’s considered cruel to the animals, however Derby Lane needed a replacement for the dogs to keep their business afloat, which is where 5-year-old Tessa Gable came into play, with her school idea fair award-winning idea.

“We do this every year.” Said Catherine Stapinksy, teacher of Gable’s preschool class.

“We let the kids submit ideas to fix problems currently effecting our city, and then we send a handful of the best ideas to the city chancellors office.” Stapinksy said.

“This year, Gable’s idea stood out as it solved numerous issues the city has been facing.” Said Stapinsky.

The idea was submitted in the form of a crayon drawing depicting characters in the old-school striped prison jump suits with dog collars around their necks, and dogs working in grocery stores as cashiers. The dogs working in grocery stores idea was scrapped, however the picture of prisoners with dog collars on was enough to inspire the city chancellor to take action.

“You don’t know how much I love betting the city’s money on dog races.” Says city chancellor Robert Magellion. “Just between you and me, off the record, I’ve lost quite a bit of our citizens tax dollars on a plethora of immoral things, but for some reason I was always obsessed with dogs.” Said Magellion.

“So I figured out a way to crookedly rig the dog racing system in an even more controllable way. Instead of worrying about dosages of dog steroids, now I can just talk to the inmates myself, telling which ones to run harder or take the fall, ensuring my gambling victories!” Magellion said proudly.

“It’s extremely dehumanizing forcing felons to compete like dogs, but it’s one of those, ‘that’s what you get,’ things because it’s like really messed up, but at the same time, these are murderers and scammers, do they really deserve humanity?” Magellion stares back at me inquisitively.

“Uhm…” I think carefully as not to piss off the city chancellor.

“I uh… I think they deserve humanity.”

The grin on Magellions face turns to a scowl as he realizes my politics don’t align with his however he doesn’t take the issue any further because he doesn’t want to risk losing his job.

“It’s actually quite refreshing to hear you say that.” He says sheepishly.

The chancellor’s secretary walks into his office filming on her iPhone.

“Hey you can’t yell at kids like that!” She said with a high school accent.

“Don’t tell me what I can and can’t do Steffany! I’m the city chancellor, you’re just a secretary! Anybody could do your job!”

Steffany kicks Magellion in the kneecap. “Ah, Gads, my kneecap!” Magellion shouts. The cops come in and arrest Magellion for being mean to Steffany, then Magellion lives out the rest of his days as the losingest inmate at the dog track, finishing with a record of 1-678, only winning one day because a lawnmower incapacitated all of the other runners. Everyone laughed at Magellion every race, and he actually became a huge draw for the Derby Lanes, because everyone wanted to see the plutocrat get what he deserved. But did that make everyone no better than Magellion to laugh at his pain? The dog track made money hand over fist, and a disgraced city chancellor suffered at the hands of the punishment he created. A karmic tale for sure. One that many could learn from, given the opportunity to open your mind to a new way of thinking. A, more stable way of-I’m sorry never mind I’m not even going to pretend I had anything for the end of this one. We’re just going to end it cold. No big finish, no punch line, just a long pile of word-failure.  Dumb writing at the lowest level. A combination of incoherent compulsive rambling and vague newsy speak. Random syntax. Nothing more. Nothing less. Let’s go Nationals! Let’s get that pendent baby!