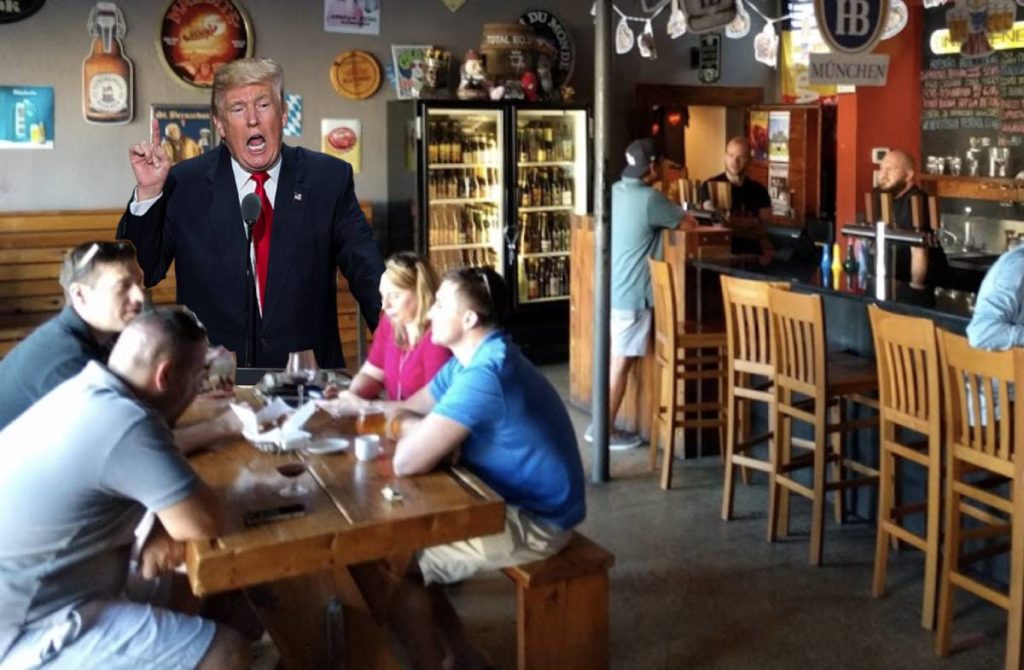 “Fuck it we’ll do it live!” says president, Donald Trump, after being informed that his State of The Union Address has been pushed back and will not be allowed at the Capitol due to the government shutdown.

Trump wanting to bring a DIY ethic back to Washington will now be giving his address at none other than The Independent Bar and Cafe in Seminole Heights. “I’m not into that over produced mainstream media anyway. My sound has always been stripped down, raw, emotional, devoid of reason. This is what the people want and I’m gonna give it to them.”

“Hell no we don’t want him here” says local IPA and beard enthusiast, Rusty Freemont. “We want to rage against the machine you cant just unplug the machine. I already get paid in exposure for my rockabilly band now Im working for free at my job with the TSA too. Ive got a hungry ferret at home and Donald Trump is taking food right out of his mouth with this shutdown. He’s playing with peoples lives.”

When asked if there were concerns over protesters, Alex Jones said, “I’ll see you whiny ass posers in the pit. If any of you antifags wanna take a shot at me ill show you what 240 pounds of human growth hormones can do.” Jones will be opening the speech by wrestling a bear on unicycle named Boris whom was gifted to the president by Vladamir Putin. When asked if there was collusion between Trump and Putin, Boris declined to comment because he was a bear.

The Independent Bar and Cafe defended their choice in offering the venue as the location for the State of the Union as strictly a business move.

“At the end of the day he puts butts in seats. He’s going to keep the bar running and we get a 10 percent cut of all merch sold. You know how the kids love those hats.” When asked if there were any ethical concerns over booking an act thats has been named in several #MeToo scandals the owner said, “Yes what he’s accused of doing is terrible but we can’t censor people that have done reprehensible things in their past. If we did it would set precedent and we wouldn’t be able to book any frontmen, drummers, or guitar players. It would just be a stage full of bass players and i cant imagine anything worse than that.”

The State of the Union will be held on February 2nd to coincide with Groundhog Day. If the groundhog sees his shadow there will be 6 more weeks of shut down, if not then they will receive approval to build the wall.

View all posts by Jarrett Moore →