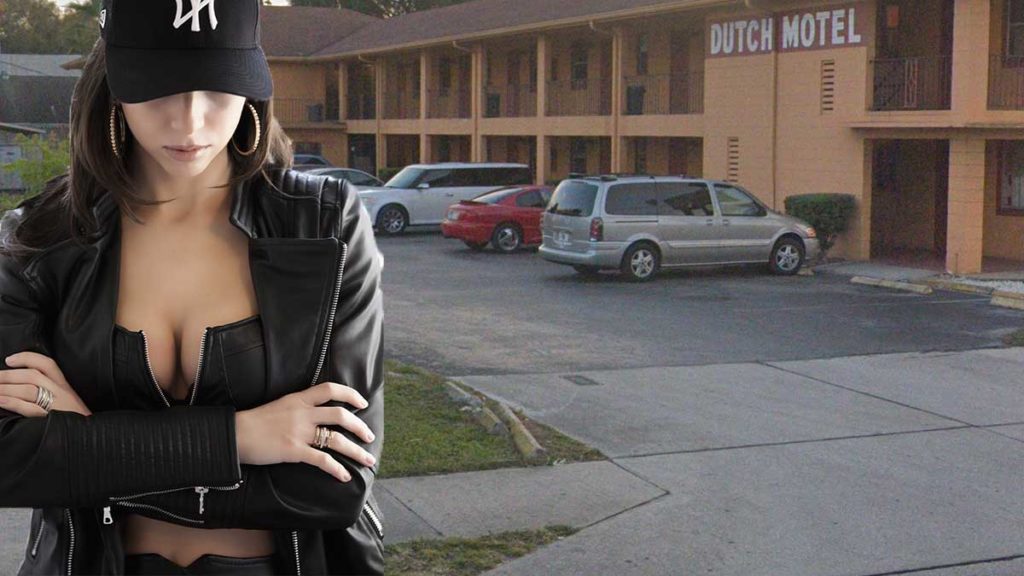 The Dutch Motel has produced a big-budget television commercial that will be broadcast during Super Bowl LIV, taking place in Miami this Sunday evening.

“Let’s face it, it’s not like the convention and visitors bureau is going to publicize us,” says owner and general manager V’lln Bliet. “That’s fine. Screw them. We’ll just do it ourselves.”

The unassuming two-story structure constructed from cinder blocks and hepatitis located at the corner of Florida and Hillsborough avenues is lovingly referred to by locals as ‘that eyesore’ and serves a clientele comprised mainly of convicted sex offenders and weary travelers nursing gunshot wounds while waiting for the heat to die down after failed armed robbery attempts at nearby liquor stores.

Mr. Bliet says he wants to expand his business and reach out to tourists and vacation travelers.

“This is a great hotel!“ He lied. “We’re right in the middle between Ybor City, the airport, Raymond James Stadium, the Hard Rock Casino and Busch Gardens and we’re very close to I-275 and the I-4 junction,” which is true. “We are right next door to one of the region’s finest Circle K’s, making the Dutch Motel just as good if not better than the Hyatt or the Hilton,” all of which is, at best, highly subjective and open to an easily-winnable debate. “Yet we’re consistently ignored by our own city’s marketing people. Well, this is one squeaky wheel that is going to make its own grease,” he said as he stirred a 55-gallon barrel full of grease with a (presumably) stolen kayak paddle.

The 30-second commercial will feature Paul Rudd, Bradley Cooper and Ryan Reynolds as a gang of liquor store-robbing sex offenders who wind up at the Dutch Motel after accidentally boarding a flight to Tampa instead of Holland.

Upon learning they’re not actually in the Netherlands, they decide to stay and enjoy the Tampa Bay Area because they love the accommodations at the Dutch Motel so much.

It ends when they’re killed in a hilarious shootout with cops at the Zoo at Lowry Park. “That’s a lot to pack into a 30-second spot but I feel like it’s a good, full representation of what our brand is all about,” says Bliet.

When I asked him how he could afford such an obviously expensive commercial, he said, “Over the years we’ve saved a lot of money by not spending it on frivolous amenities like a pool, a bar and restaurant or a fitness center,” He continued, “Also, mattresses don’t necessarily need to be replaced as often as most people think, especially those know-it-all’s at the health department. Plus, we were able to lower production costs by offering some rooms in trade. Let’s just say you can expect to see Rudd, Cooper and Reynolds NOT struggling to find a place to stay when the Super Bowl is in Tampa next year.”