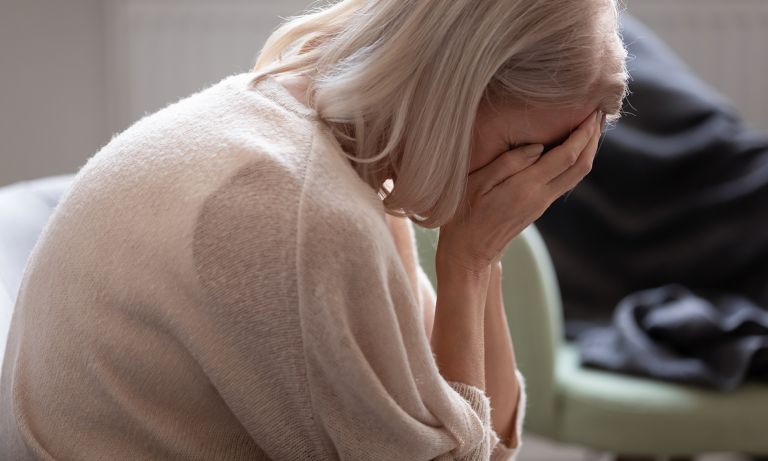 Carol Wish-Washer of Temple Terrace was very pleased with herself for being one of many people to take advantage of the opportunity to cast her vote in this year’s election, until she realized that she hasn’t determined who she wants to be the President of the United States yet.

“My God. What have I done?!?”, she said, overcome with grief and regret.

She said the enthusiasm about early voting, which began last Monday in Florida, got to her and caused her to react impulsively. “All the pictures on social media. It just looked like everyone was having so much fun! I wanted to be part of it”, she said “And the stickers. Oh my stars, such wonderful, colorful stickers! I so badly wanted a sticker!”

The reason she was undecided was the choice between Trump and Biden was just so complex and difficult. “There are a number of issues to consider”, she said. “I like how Trump puts priority on America first, but I can’t say that I approve of his personal conduct and behavior sometimes. On the other side, there’s Biden, who seems nice but I’ve seen him described as ‘sleepy’ and that’s not something you want from a leader. Then you’ve got Russia and Ukraine and everybody knows there’s all kinds of bad stuff going on over there with that.”

She says she showed up at the public library on Bullard Parkway around 11am and got in line. “It wasn’t bad. I guess I waited about 45 minutes or so. I was excited to be participating, playing my part in democracy”, she said. “I was already planning my selfie before I even got inside. I couldn’t wait to make others feel the shame I’d been the target of… although that’s not the reason I did it.”

Once she had her ballot, she made her way to an unoccupied booth. “The very first item at the top was the choice between Donald Trump or Joe Biden. That was when I suddenly remembered, ‘oh yeah, I don’t know which one I want!’ I just skipped it, figuring I could go back and do that one last.” She made her way through the county commissioners, judges and assorted amendments and still hadn’t made up her mind between Trump and Biden. “I thought, ‘well, I’m early; I’ll just come back tomorrow or the next day and finish up then’, hoping they’d just give me a sticker right then and there because I had already pre-written my Instagram post.

She said she sensed there might be a problem when she inserted her incomplete ballot into the optical scanner and it didn’t come back out. “I asked one of the volunteers how to get my ballot back so I could finish it. He looked very confused by my question and said, ‘ma’am, once you submit it, that’s it, it’s over’. I said, ‘well, that can’t possibly be the case; let me speak to a supervisor.’ He went and got a woman who apologized and explained that it was the case!”

“I was so upset I left without even taking a sticker”, she said.