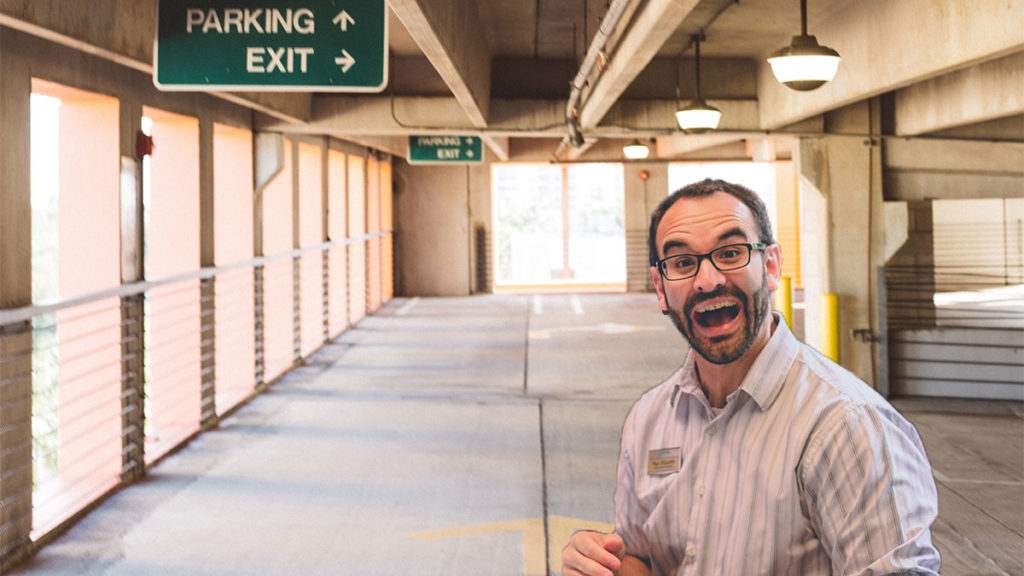 Justin Rooper, a sophomore at the University of South Florida, has been disowned by his family for taking a part-time job with 717 Parking.

“This is it, the last straw. No son of mine…” says Todd Rooper, Justin’s father, before being overwhelmed by grief and anger. His wife Carol patted her husband’s shoulder and said, “We’re just really disappointed and having a hard time dealing with this, obviously.”

Todd composed himself, neglecting a long string of snot dangling from his nose. “When Justin was driving around with the Confederate flag in the back of his pick-up, it wasn’t the kind of thing people here in Carrollwood approve of and we got some notices from our homeowners association. But we said, ‘well, it’s heritage, not hate.’”

The snot was now hanging below his chin, swinging back and forth and it was very distracting. “Then he joined the actual Nazi party and we said, ‘well, it’s good to learn about different socio-political viewpoints and the uniforms are sharp.’”

At this point, the snot string was near Todd’s waist and I was silently screaming, ‘for the love of God, suck it back up or wipe your damn nose! You have to know it’s there!’

Oblivious to all of that, Todd said, “But this is too much! I simply won’t have a son of mine actually harming and oppressing people as a paid thug for the parking mafia!”

His mother Carol wailed in anguish, “Why couldn’t he have just been gay or join a suicide sex cult??” She said before finally handing her husband a tissue.

For his part, Justin says his regrets are few. “It’s a good part time job. I go in to the office and do some filing and answer phones for a few hours, a couple of days a week. No big deal. They’re super-flexible when it comes to my course schedule at USF. Also, I got to break a guy’s leg last week, when he didn’t pay his monthly fee for the L34 lot. That was awesome,” he says. “But I probably should have waited ‘til Thanksgiving to tell the folks. Holiday dinners are the appropriate occasions for this kind of family drama.”