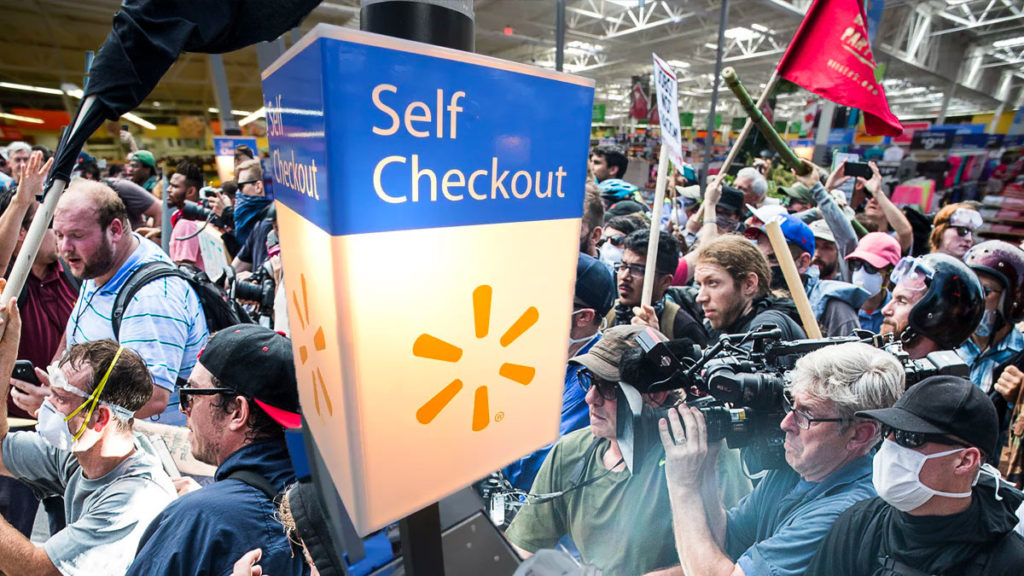 In what was described as a particularly long wait time to use the self-checkout at the Walmart on Fletcher Avenue, nearly 150 customers stood in line for nearly three hours before being allowed to leave the store with their purchased goods.

“I got in line and went to scan one of the things in my very full cart of groceries,” said June Ellis, an 18-year-old college student at USF. “The lady running the counter said it didn’t take debit card so I went to the ATM to take out cash.”

Ellis left her cart full of groceries and drove to her bank to use the ATM.

“When I got back from the bank to complete my checkout, the lady said a riot broke out because my checkout station was the last functional one in the store and everyone was really mad they were holding it for me,” Ellis began to cry.

Cassandra Noriega, 63, a Walmart employee tried to contain the chaos that was ensuing as angry customers wanting to checkout decided whether to abandon their carts or wait it out.

“The girl, I told her there was an ATM right there,” Noriega pointed to an ATM in clear view from the self-checkout area. “All the power went out and came back on and for some reason this was the only working register in the store.”

Noriega then excused herself to go back to work, so I spoke to some of the people who had checked out and were waiting outside.

“Yeah I waited in line for almost two hours,” said Salsy McLlama, a 37-year-old Hispanic male. “I’m good at waiting. Everyone else though, they get inconvenienced for one second and all of a sudden it’s the end of the world.”

When asked why he wasn’t bothered by the wait he responded, “Oh I was bothered. I hate being seen standing in line at Walmart.  That’s the most humiliating shopping experience, wandering those isles looking at all that mass produced garbage. Even worse that I have to take an Uber home now.”

McLlama then loaded his soaked grocery bags into the back of a Honda CRV that pulled-up, got in the passenger seat and asked the guy if his name was Douglas.  They took off and got in an accident leaving the parking lot.

Thankfully, nobody was injured.