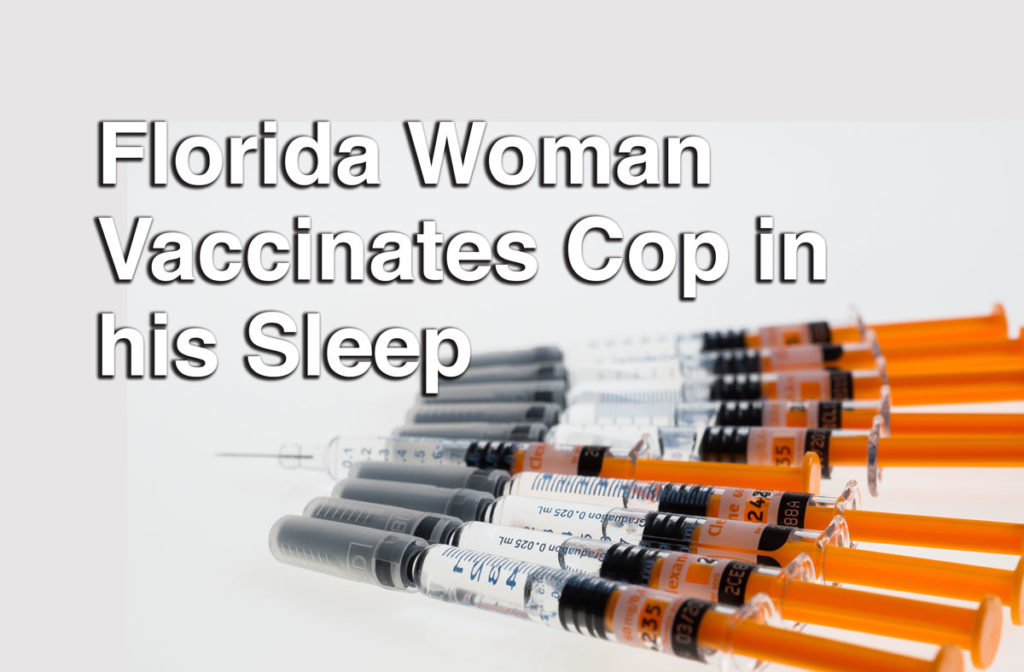 A woman in Pasco County has been arrested on felony assault charges after breaking into a police officers home and vaccinating him in his sleep. Heather Portabello, the woman in custody, apparently broke into the officers home around 2:30 am with a hypodermic needle full of the Measles Vaccine and stuck it into the cops left arm while he laid unconscious in his bed.

Hours before Portabello showed up to the officers house to carry out her task, she posted numerous times on her personal page saying things like, “No officer’s going to tell me I have to vaccinate my child! Just because he’s been around 15 other children who have all gotten the Measles, and the other parents keep claiming my son has the Measles and he shouldn’t be going to school, THAT doesn’t mean that I have to do anything! Jesus will protect us!”

Portabello had been in an altercation earlier in the day, when the police were called to her child’s school, because rumors had been going around, that the Portabello family did not vaccinate their children, and had pointed out her son.

At 2:13 am, on Portabello’s twitter @ClevelandBellyBump69 she stated, “Cop wants vaccines, he’s going to get vaccines!” One of her friends responded to the tweet saying, “Wtf r u up 2!” Another friend responded, “Go get that pig!” With a needle emoji.

Portabello used her bare hands to rip the door handle off the door and kick it off the hinges, because Portabello is a body builder and has an unnatural strength you wouldn’t normally encounter amongst a woman who doesn’t vaccine her kids.

Once inside, Portabello sniffed in the air, based off security camera footage, and was able to immediately tell what room the officer was sleeping in. Once she found him, again from the security footage obtained, she started silently dancing at the foot of his bed, twirling her head about, back and forth, like a bad 80’s hair metal music video. After she finished her ritual, she began slowly undressing the officer in a lewd sexual manner. Once, the officer was completely naked, still snoring, she then plunged the needle into his arm, nowhere near a vain.

The officer immediately woke up and knocked Portabello to the ground. She began shrieking and saying she was going to “call the cops,” while the officer placed her in handcuffs. The officer then called for backup, and Portabello was taken to the Gerald Ford Custody Center for Detained Women in Western Oregon. Portabello is currently in custody being held on $8,000 bail.