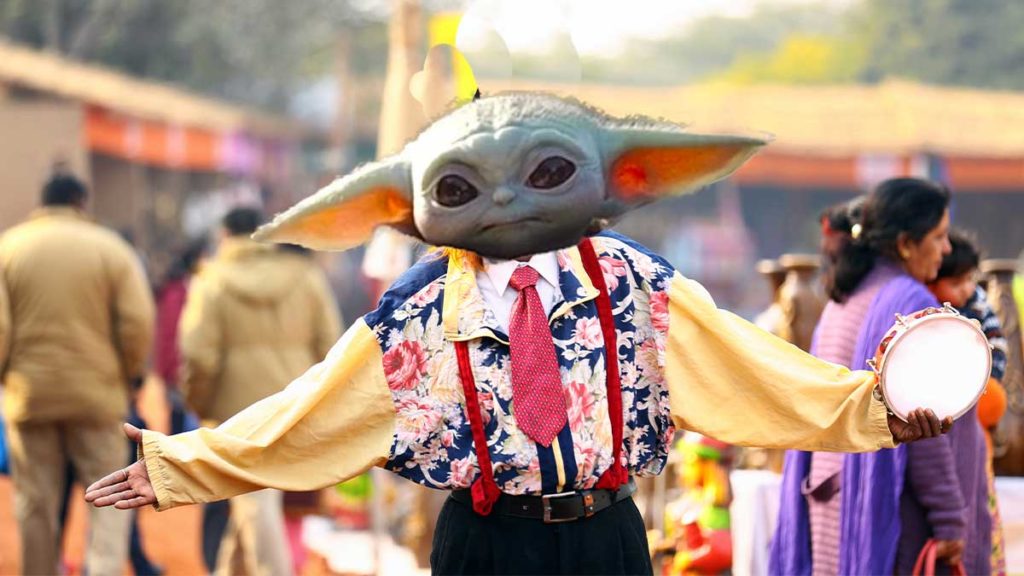 Jeff Cleppers, an Oldsmar resident who has struggled for years to make a living as a clown who performs at children’s birthday parties is now booking himself as “Baby Yoda” and is so busy that he’s turning down offers.

“It’s crazy how much people love that ugly little upright walking lizard,” says Cleppers, watching yet another inquiry on his cell phone go to voice mail. “For years and years, nobody cared about Yoda other than to make fun of the way he talks. Then Disney came along, makes him short with big, black eyes and now money out of his puckered green ass it shoots.” He adds, “I’m still trying to get the Yoda-speak thing down. Luckily for me Baby Yoda doesn’t talk yet.”

Cleppers, an honors graduate from Ringling’s clown college in Sarasota, says the timing couldn’t have been better for him. “Clowning is a tough racket. It’s super competitive, with a bunch of jerk offs like me fighting over the small handful of gigs out there. Then the Joker movie came out and the market really dried up. The few people who weren’t already creeped out by clowns stopped calling. I thought I was going to have to move back in with my folks.”

After the new Disney+ streaming service premiered “The Mandalorian” on November 12th. An off-shoot of the Star Wars franchise, “The Mandalorian” is the story of an interstellar bounty hunter, and it was an immediate hit. The breakout character “The Child”, described usually by those in the mainstream as a “Baby Yoda”, has been wildly popular in memes and other pop culture references since first appearing on the show.

“I was using my girlfriend’s Disney+ log in and started watching this show about a Robocop and his pet puppet. It was ‘The Mandalorian’ and I found out it was a pretty big deal. I remembered I had an old pair of Spock ears lying around,” says Cleppers. “I found them, painted ‘em green, same with my face, put on some sunglasses, wrapped myself in a blanket and boom, Baby Yoda became I did!” He started advertising on craigslist and has been in constant demand since. “Love me, the kids do! Enough of me they can’t get!”

That opinion appears to be subjective at best. “He’s terrible,” says Carol Gudney who recently hired Cleppers to perform at her 5-year-old daughter’s birthday party. “For starters, he looks nothing like the adorable Baby Yoda on the show and the kids reacted negatively to that right away, running away and screaming. As if his off-putting appearance wasn’t bad enough, he chased the kids around, sticking his tongue out like a snake and hissing at them. Virtually all of them have had nightmares every night since. It was a disaster.” Cleppers responded, “Hey, who’s to say Yodas aren’t part-snake? They live in swamps, don’t they?” He paused to light a cigarette with a cease-and-desist letter from Disney before adding, “Besides, care I don’t. Cashed that check I did.”