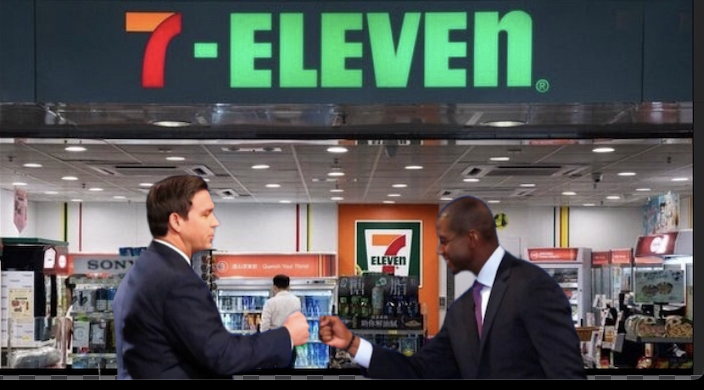 Previously beloved Governor Ron DeSantis was caught on Saturday buying crystal meth off of former gubernatorial opponent Andrew Gillum by an off duty police officer who happened to witness the transaction in the back of a 7-Eleven in Ruskin.

“I was filling up my cruiser and I saw the Governor and former candidate behind the 7-Eleven clearly doing a drug deal. They were taking turns smelling and tasting the contents inside of the bag, laughing loudly, rough-housing. I was even able to hear at one point DeSantis say, ‘I love you Gillum you gay son-of-a-b**ch I don’t care how you smuggled this in, it’s going right up my nose and in my veins.’” Officer Ornthrump detailed in an on camera briefing to the press.

The exchange was caught on surveillance video as well, however both sides are vehemently denying the accusations.

“This did not happen, the Governor did not do this.” Read a statement released by the Governors office.

“I didn’t do this.” Tweeted Gillum.

There was a brief court hearing on Sunday morning and it was decided that no penalties will be incurred on either side.