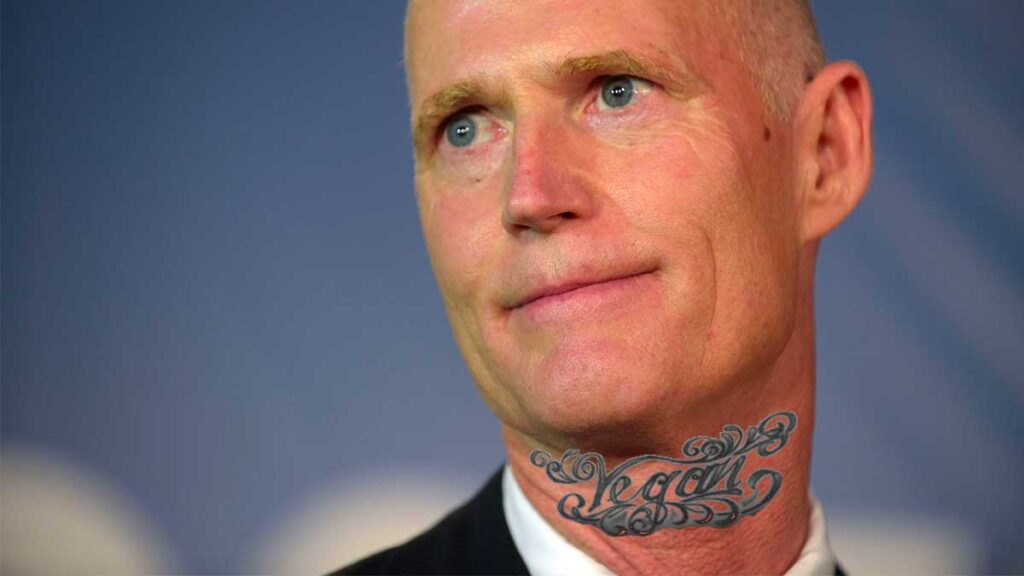 While trying to impress a group of interns in the Senate, Rick Scott showed off his new ‘Vegan’ neck tattoo in an attempt to win their approval.

“I was at Whole Foods today and I didn’t buy a single animal product,” said Scott while showing off that he has a lot of money to a group of underpaid, overprivileged college students.  “Animal products give me a rash, and I’m at that age where the rashes get really bad and don’t go away for days.”

The group of interns were all wearing masks, but they were still visibly annoyed by this disgusting, terrible human person attempting to win their approval with an awful pandering maneuver.

As the interns dispersed, Scott craned his neck back and began wandering around the halls of the Senate, walking around like a racist giraffe until he ran into fellow Florida Senator Marco Rubio.

The two had a good laugh about the terrible unemployment system in Florida and the fact that their State’s economy depends on seasonal slave-labor wage jobs.

After finishing their secret discussion about how they aren’t going to fix anything and continue doing absolutely nothing to help the people of Florida, Scott confided in Rubio that while he has switched to a vegan-diet, he still occasionally visits the immigrant concentration camps to consume the flesh of children who were separated from their families.

At that moment, Rubio removed his mask to reveal that he was a secret PETA-agent posing as the Senator to find fake vegans in the Senate.

“We knew you weren’t going to hold up for too long,” said special PETA-agent Mikro Phenis.

Scott is currently in vegan jail and is awaiting his court date for lying about his diet.