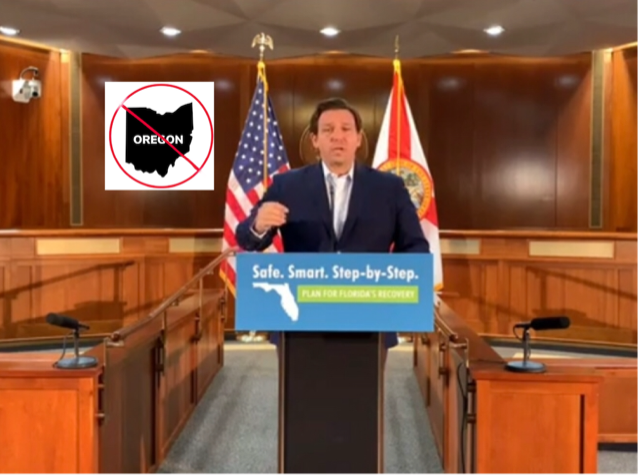 In the wake of news that voters in Oregon have voted to decriminalize the possession of heroin, methamphetamine, LSD, oxycodone and other hard drugs, Florida Governor Ron DeSantis has declared that the Pacific Northwest state is now illegal in Florida.

Measure 110, which passed on Tuesday with 58.5% of the vote, drastically alters how Oregon’s justice system will deal with those who are found with personal-use amounts of the hard drugs. Instead of going to trial and facing possible jail time, a person would have the option of paying a $100 fine or attending new “addiction recovery centers”, which are funded by tax revenue from Oregon’s legalized, regulated marijuana industry. Oregon legalized marijuana in 1973 and generated $725 million in tax revenue in 2019. The measure goes into effect on December 2 and is expected to result in approximately 3,700 fewer Oregonians per year convicted of felony or misdemeanor possession of controlled substances.

“So you mean to tell me that people with addiction issues will have access to treatment funded by weed and fewer of them will be incarcerated in the process?!?”, asked DeSantis rhetorically. “Well I’m sorry, but I don’t see how anybody could possibly see that as a good way for a state to govern its citizens. It’s not going to happen here, I promise you.”

Further, basketball games between the NBA’s Orlando Magic and Miami Heat versus the Portland Trailblazers are also now illegal. “You can’t be too careful or too stupidly over-the-top when it comes to something like this”, DeSantis said.

Anyone found in possession of these items or participating in these Oregon-centric activities will be subject to monetary fines and prison sentences currently defined by DeSantis as “out the ass.”

One notable exception is methamphetamines. “Folks in Pasco County have to be able to get things done”, DeSantis said.