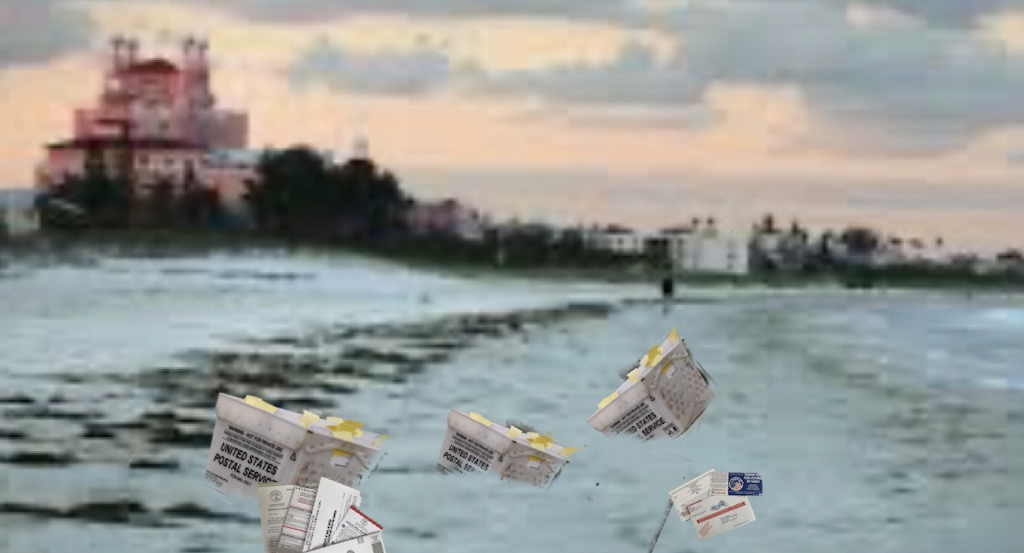 The ballots are from numerous states all over the country, with a specific instructional note attached to many reading “Make sure these Republican votes never see the light of day” Signed with the initials JB and KH. Speculation is that those initials stand for Joe Biden and Kamala Harris, however no one has come forward with any information regarding how the ballots got there.

“It’s the dumbocrats trying to loot the election!” Shouted Ted Vunkintsky from in front of the St Pete town hall, protesting the election results, waving a large wooden stick with a homemade flag attached to it.

“The dems created the China plague to justify massive mail in ballots, in turn giving them the opportunity to commit voter fraud!” Vunkintsky exclaimed.

“I’ve got to give it to them, it’s quite clever foresight to kill hundreds of thousands of people to get your way, but it’s not right! We deserve to win again, and we will win again, once they count these ocean votes they found. Unless they’re for Biden, in which case I don’t believe they should be counted.” Vuntinsky sternly proclaimed.

The police have gathered the damp ballots off of the beach and have clipped them to a clothesline to dry out in the sun. Once the ballots are completely dry they will open them and read what they say, and decide what to do from there.

“We’re not sure where to go from this point.” Said St Pete alternate police chief Russ Oolong.

“We’ve already been paid a large amount of money preemptively by a certain campaign to look the other way on this sort of thing, we actually received the funds in January with a note of ‘you will know what this is for’ and we strongly believe that this is what it was for, so we are choosing to remain willfully ignorant at this moment until someone else gives us a large sum of money that we can use at our discretion because we don’t get paid enough and this is the only way we can afford to give our wives that hot tub with the wood paneling inside of a gazebo that they’ve always wanted.” Oolong commented.

After the police chiefs press conference the reporters were asked to come into a separate room where they were told to look into a device which I can only describe as being similar to the thing from the movie Men In Black where it would flash and then the people would have their memories erased. When it was my turn to go into the room I  told them that I didn’t work here and I was just looking for the bathroom and they let me leave without flashing me. I still have no idea what that thing did!