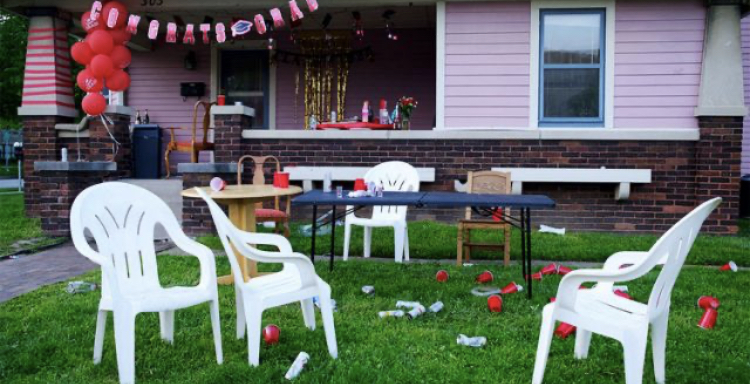 “Well, gotta go”, said Cheryl Wooding, just as Debbie got up from her lawn chair and started to gather items to take back inside. “I don’t want to expose anyone unnecessarily to the risk of spreading COVID-19.”

At that point, Ronald began the process of cleaning his grill and Mike Furmer piped up and said, “I’d help you, buddy. But we have to stay six feet apart. See ya.”

Cliff Thurber and Judy Hinsch, who had been playing cornhole, noticed these two interactions and also dispersed immediately, in spite of being 27 feet apart. “Can’t be too careful”, Thurber yelled from the driveway, abandoning the casserole that still contained most of the weird homemade side dish with baked lettuce, olives and cherries that he’d brought. “Yeah, this virus is nothing to fool around with”, said Hinsch, who was supposed to bring a bag of ice but somehow forgot.

One guest who didn’t leave as the clean-up effort began was Debbie’s brother Ted, visiting from Ft. Myers, who had spent the entire day in the Flagsmores’ above-ground pool. “Being completely frank, I’ve pee’d in here so much today that I’m either gonna get sick and die for sure or I’m immune to everything that could possibly come my way. So what’s the point?” He cracked open another Miller Lite, pulled off his N95 face mask emblazoned with a Miami Dolphins logo and stayed in the pool, choosing to ignore the obvious and implicit hints that Ron and Debbie could use a little help.

The family’s two children, Devin and Courtney, didn’t wait til the cookout was over to practice social distancing, having spent the whole afternoon and evening in their respective bedrooms watching TikTok videos and Twitch streams, except for leaving briefly to get one plate of food each. A mumbled grunt from Courtney about hating baked beans was the only comment offered by either of the two offspring.

“This is proof that in spite of everything that’s going on, American tradition is strong and will survive”, said Ron proudly as he shoved another handful of dirty paper plates into a garbage bag. “Because this is pretty much the same bullshit that happens every year.”

← DeSantis linked to helicopters and fireworks every night; Personal useThat One Chicken Who Runs Wild Around Ybor Announces She’s Running for President →