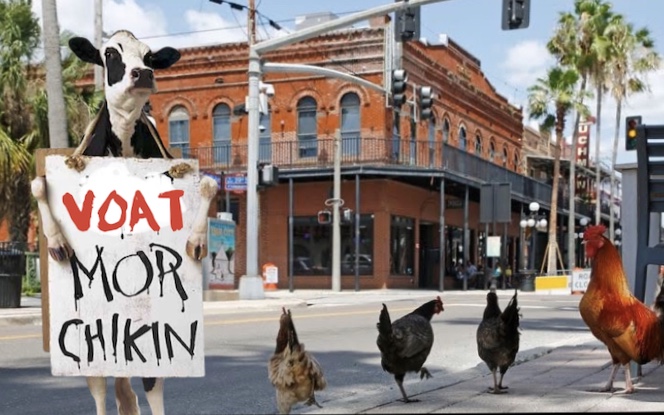 Shortly after Kanye announced he plans to run for president in the upcoming November election, that chicken who runs wild around Ybor announced that she, too, will also be running for president. Not the one chicken you’re probably thinking of, the other one. The one with the brown feath – no not that one – the one with the bird feet. Yea, that’s the one.

When giving her official statement, the chicken said “cluck cluck cluck,” which loosely translates to “I found a small bag of white powder on a bench in Ybor and once I took it, I felt I could do anything. Especially run for president.”

The chicken’s political publicist is working on her campaign now. The chicken has an abundance of political-adjacent experience. She once pooped on an Obama sign in somebody’s yard during an election year. It is unclear as to what party the chicken will be running with because she also pooped on a Trump sign as well.

The chicken does have some firm political stances, which lean towards left ideology. She supports a chicken’s right to do whatever they choose with their eggs. This appears to be the equivalent of pro choice.

Her campaign slogan is deeply potent. “Cluck cluck cluck,” which loosely translates to “America get your fucking shit together why the fuck am I the best option for president and I’m a fucking bird.”

← Group practices social distancing immediately after cookoutFurries making a comeback, thanks to COVID-19 →