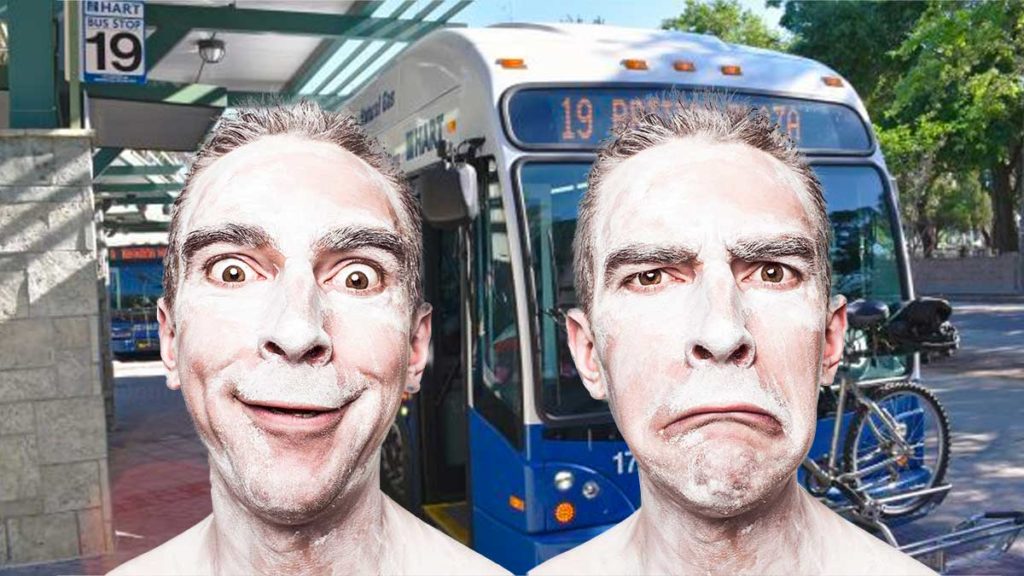 Exciting news for the socioeconomically challenged residents of Tampa Bay, Hillsborough Area Regional transit announced today that it will be increasing the quota of homeless schizophrenics per bus from 1 to 2. The move comes as ridership has decreased over the last year.

“We feel ridership numbers may be lagging due to a trip on the HART bus not being as entertaining as it has been in the years before.” Said Andrea Shields HART dispatch manager.

She continued, “Everyone is always occupied with their phones these days. One schizophrenic on a bus just isn’t enough to spike people’s interest anymore. No one is looking up from Facebook when our regular schizos yell that the ‘gray/ green’ men are coming and it all starts with ‘avocados on cheeseburgers’ that’s when we realized we needed to step up our game.”

HART CEO Richard Burke added “not only are we increasing our homeless schizophrenic quota from 1 to 2 per bus we’re also supplying them with 4 packs of Natural Ice tall boys on each ride.”

“How does this help?” I inquired.

CEO Mr. Burke added with a gleeful smile, “If we can get both schizophrenics drunk the likelihood they will fight each other increases by 70% and studies have shown people who ride the bus are likely to find that very entertaining and hence will ride more often.” I jotted down his answer with a puzzled look on my face.

“What about just adding some old Asian Hookers to each route? I’ve always found them to be pleasing to fellow riders.” I said.

Mr. Burke replied quickly, “We did do a beta test on that but it turns out happy endings are hard to get off windows.”

“That makes sense.” I said.

Mr. Burke continued, “We just want to make sure our patrons are patronized.” He then cut our interview short and headed off to Memorial Hospital to pick up a group of recently discharged baker acts. I got on the bus to go home, not sure how to feel about all of what I had just heard, my worry seemed to evaporate because the man sitting next to me said he has a receptor in his fingernail and the CIA is coming to get him.

“Can I get one of those Natty ices?” I asked

“As long as you don’t tell big brother” he said and happily obliged.