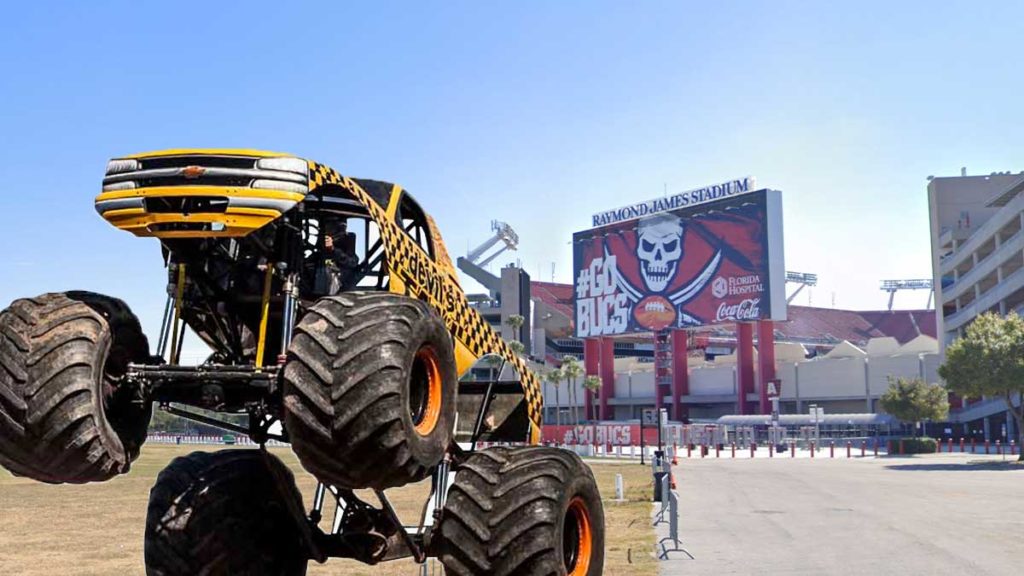 An oversized pick-up truck with huge tires designed to crush objects and navigate obstacles that was performing as part of the “Monster Jam” event at Raymond James Stadium Saturday night escaped and wreaked havoc in Tampa before being taken down by Tampa police officers.

‘Pene del Diablo’, a modified Ford F-150 suddenly became enraged for some reason during the event’s preliminary stages and broke free of restraints.

“I don’t know what happened,” said owner and driver Thundercliff ‘Winnie’ Winclufster. “Maybe it was the crowd noise or all the spectacle. Maybe it just went through yet another really bad break-up and can’t believe it’s so hard to meet chicks on the monster truck circuit or that it’s still single, heading into it’s 40’s. I guess it’s just one of those things that’s impossible to know,” he said from behind the wheel, where he was the entire time.

The truck drove up into the stands at section 110, crushing hundreds of fans to death as they screamed in delight. “Best Monster Jam ever!” Yelled Travis ‘Jimmy’ Travers of Bartow as his body was being pulverized. “Awesome! And also, ouch!”

The truck escaped the stadium by bursting through a window in the club section and headed east, toward downtown. It flattened a Checkers, a Boston Market and a number of so-called pain clinics among other businesses along MLK Boulevard, with police in pursuit.

Tampa police officer Bob ’Bob’ Robertson said, “We probably could’ve caught up with the truck and cut it off, since our cars are actually much faster and more agile. But instead we chose to follow closely and observe because when will we get another chance to see a monster truck reduce a Burger King to greasy, smoking rubble?”

The truck eventually climbed the Sun Trust building Before being shot down by a squadron of Tampa Police Department F-16s, following a scramble order issued by Mayor ‘Jane’ Castor. “One could say ‘T’was beauty killed the beast,” she said. “But it’s probably more accurate to say t’was the air-to-surface missiles.”