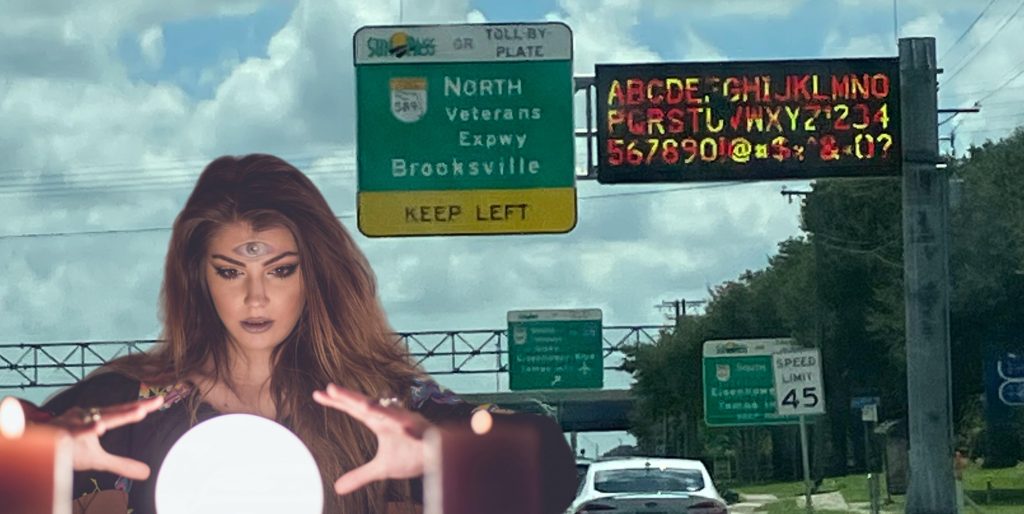 The Florida Department of Transportation (FDOT) has awarded the contract to produce roadside safety signs along the state’s highways to toy manufacturer Hasbro, who plans to utilize their patented Ouija technology.

“Florida drivers tend to interpret such signage in ways that suit their own, individual personal needs. Things like speed limits, road closures and which direction traffic is intended to flow are best served with subjective messages like the kind you get using a Ouija Board, so this will probably be ideal,” said Hasbro spokesperson Furby LiteBrite. “Wait, not the American toy company founded by Morris Michtom and his wife, Rose that eventually became the largest doll-making company in the United States. Not THAT Ideal.”

A Ouija Board, also known as a Spirit Board or Talking Board, is a flat board marked with the letters of the alphabet, the numbers 0–9, and the words “yes” and “no”, along with various symbols and graphics. It uses a planchette (small heart-shaped piece of wood or plastic) as a movable indicator to spell out messages during a séance. Participants place their fingers on the planchette, and it is moved about the board to spell out words.

For the sake of these new signs, drivers can download the planchette app provided for free by Hasbro and look at it on their phones while they’re driving.

“Anybody who doesn’t want to download the free app obviously doesn’t care about safety, and therefore doesn’t need to worry about what the signs say,” said LiteBrite.

So far, the only people who have registered any complaints about the new contract and the proposed technology are religious leaders who worry it will inspire commuters to dabble in dark arts.

“Look, can it be used to summon demons or not?” asked Pastor Raymond Horks of The First Church of Increasingly Irrelevant Scripture in Brandon. “Because my commute on I-4 is already Hell on Earth. So to speak.”

“Don’t be ridiculous; like any Ouija Board, it’s not actually going to work,” replied LiteBrite.