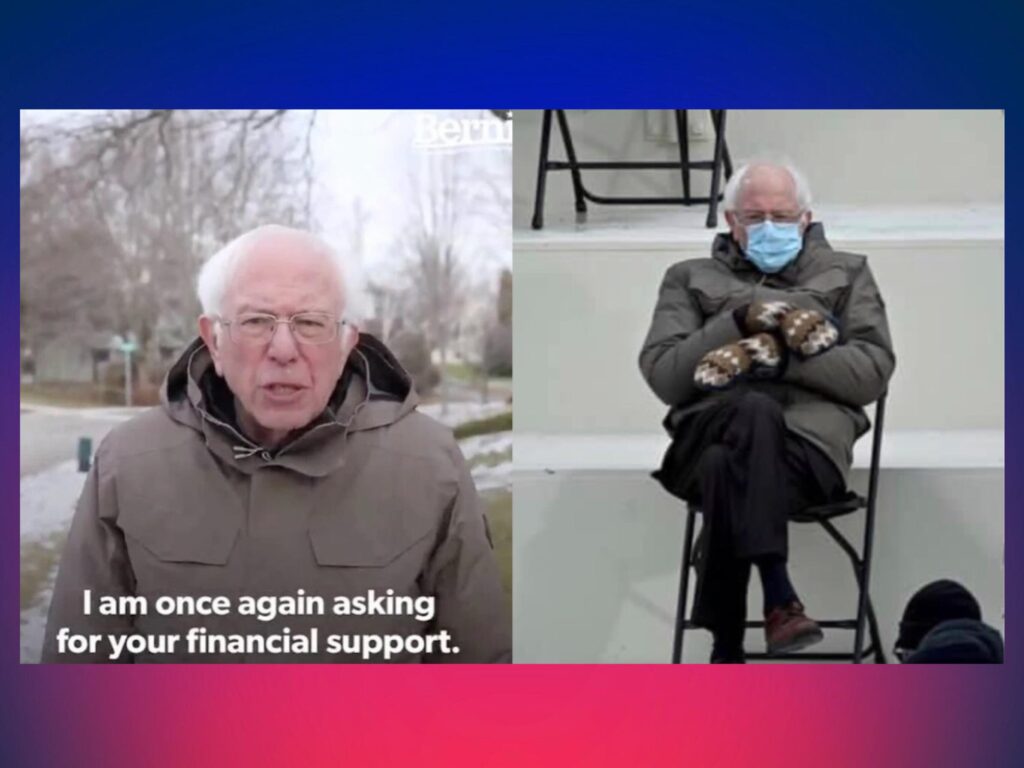 The whole world witnessed Senator Bernie Sanders attending the inauguration ceremony for President Joe Biden and Vice President Kamala Harris Wednesday, and a billion memes were launched as a result. Many people noticed that Bernie was wearing the same coat he had on in a 2019 fundraising video which was also the source of a number of memes.

Not that there’s anything wrong with the coat he has now. We’re sure it’s a FINE coat. Bernie seems like a very no-nonsense, down-to-business, bottom-line, results-driven person and doesn’t need to express himself with a sartorial statement every time he steps outside. Who has time for that kind of nonsense? Maybe Mariah Carey but not Bernie Sanders. If he has determined his coat, a men’s Burton GORE-TEX Edgecomb Down 3-in-1 Jacket, suits his needs and fulfills its purpose, then it’s good enough for him and that should be good enough for us, damn it.
Still, wardrobe options are good. The color of his current coat is a little drab and there’s nothing wrong with being able to change things up now and then. And we’re sure he could buy his own coat if he wanted to, but he seems like a cool guy, a good person who genuinely wants what’s best for everyone, regardless of political affiliations and that’s pretty admirable, so we thought it would be nice to get him a coat as a present.

Unfortunately, the Men’s Burton GORE-TEX Edgecomb Down 3-in-1 Jacket is no longer in stock at Burton’s web site or anywhere else we looked. We’ll have to get him something from The North Face or LL Bean or some place instead* (we understand he’d prefer something from Burton, since they’re from Vermont, his home state, but they’re out, okay?)

We believe $350** should be enough to get him something nice, so throw in a few bucks and help us make this happen! We’ll enclose a nice card (Hallmark!!) with every donor’s name in it so he knows who pitched in. Thanks!

* If you’re a manufacturer of high-quality, rugged outerwear and want to hook us up with a discount, that’d be great!

** We anticipate incurring some administrative costs like shipping and a Hallmark card, a pen and, um, others. So if we could get some more than the target goal, it would help us defray those somewhat.

(EDITOR’S NOTE: We received this message from the nice people at GoFundMe shortly after launching the campaign: “We are writing to inform you that your GoFundMe has been removed because we are unable to verify your connection or withdrawal plan to the intended recipient of the fundraiser’s donations.” We could have appealed, but we didn’t feel like it. Also, they’re right. The whole thing was basically a scam. I mean, we would have done everything we said we would, even the Hallmark card part, but we were hoping it would turn into one of those stupid things where a guy makes millions from a potato salad recipe. So there’s no campaign but we still think the idea was funny enough to write about. Sorry.)