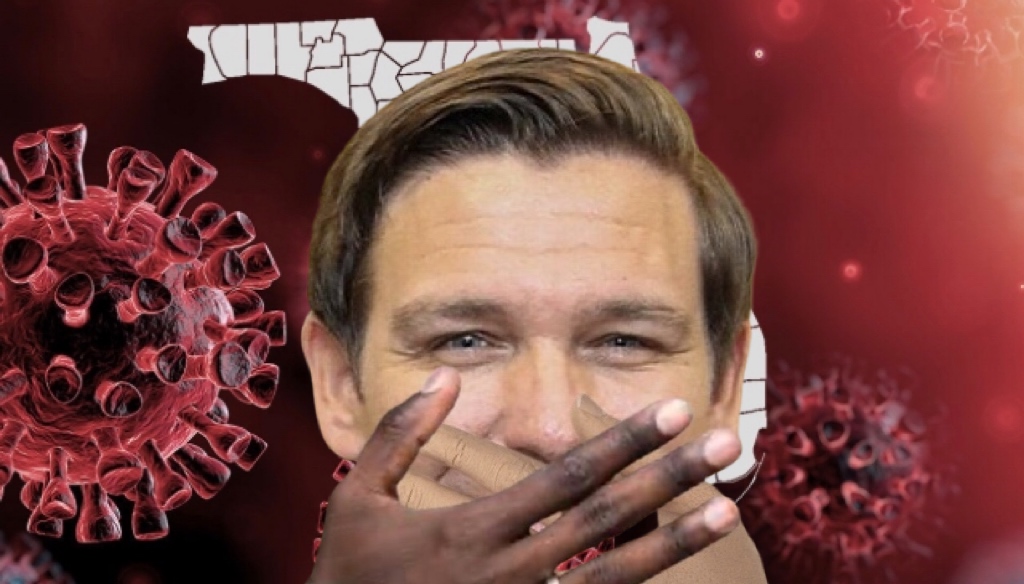 Following the news that the state of Florida and the Tampa Bay area are finally seeing some positive trends in terms of Coronavirus numbers, Governor Ron DeSantis needed assistance from common citizens to keep from saying something stupid.

Monday’s report of 2,258 new cases was the lowest since June 14. As far as percent positivity in Florida’s testing, it’s ranged from 4.95% to nearly 12% over the last two weeks. It’s a steady decline from early July when it jumped as high as 18.46%.

Upon hearing this report, DeSantis bolted from his desk and made a break for his office door. A security detail assigned specifically to keep him from overreacting to information was able to block the door before he could escape but he turned and leapt through a window and made it out onto the street outside.

Back in May, DeSantis scolded the media for making dire predictions for the virus’s impact on the state, claiming Florida was actually among the leaders in the nation in getting COVID under control, saying “So any insinuation otherwise is just typical, partisan narrative trying to be spun and part of the reason is that you’ve got a lot of people in your profession who waxed poetically for weeks and weeks about how Florida was going to be just like New York. ‘Wait two weeks, Florida is going to be next. Just like Italy, wait two weeks.’ Well hell, we’re eight weeks away from that and it hasn’t happened!” These remarks proved to be ill-advised and premature as Florida’s numbers skyrocketed.

Managing to evade the security detail chasing him, DeSantis ran into a nearby bar and turned on the karaoke machine, the closest microphone he could find. “Look at these ‘Rona numbers! Look at them!! What has Rick Scott done?? NOTHING!! What do you have to say now, motherf–“, he shouted before being subdued by Ronnie Mifton and Kyle Alcindor, two of the bar’s patrons who recognized the dangerous situation developing and acted swiftly to stop it. The governor’s security personnel eventually showed up and escorted him back to the mansion.

“I’m not superstitious but the last thing we need is to tempt fate”, says Mifton. “That, and we could also do without our governor giving the country yet another ‘Florida Man’ story”, added Alcindor.