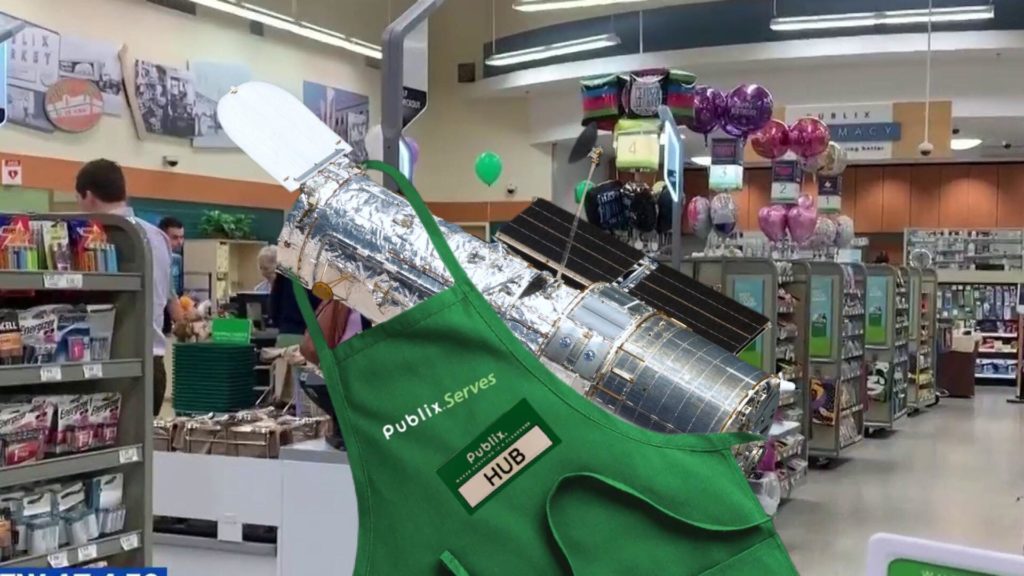 “Yeah, I guess they don’t need good ol’ Hub anymore,” said the Hubble with a wry chuckle from its new job as a grocery bagger at the Publix on North Nebraska Avenue in Tampa. “That’s the way things go and I’m okay with it. Honestly, I am. But I think I still have some good years ahead of me.”

The Webb is considered by NASA to be the scientific successor to Hubble, since its science goals are directly influenced by results from Hubble, inspiring the organization to go beyond what Hubble had already done and what it was capable of. In particular, more distant objects are more highly redshifted, and their light is pushed from the UV and optical into the near-infrared. Thus observations of these distant objects requires an infrared telescope.

“Sure, I get it,” said Hubble. “I could only look at the Universe primarily at optical and ultraviolet wavelengths. Of course, I was always held in a very close orbit around the earth, only about 545 kilometers (km) high, while Webb will be 1.5 million km away, so that’s something of an advantage I never had. But like I said, I’m not bitter; I wish the young fella all the luck in the world. Or more like the whole universe! Ha ha!”

Hubble said it sought it’s new position with Publix because it wanted to stay busy and noted that many retirees work there.

“It’s a terrific company. The benefits are top notch!” said Hubble. “And I get to stay active, which is important to me.”

“For Pete’s sake, I’m only 32! Is that too old? Of course not! Well, okay, maybe it is for a piece of deep space exploration hardware.”

“Or a leading actress in Hollywood,” it added.

At that point, a manager approached and said, “Hey Hubble, somebody dropped a bottle of V8 juice in aisle 7. It broke and spilled all over the place. It’s a real mess. Can you take care of that please?”

To which Hubble replied, “Hmm, let me think; in order to take images of distant, faint objects, like the birth and death of stars in galaxies billions of light years away, and comet pieces crashing into Jupiter’s atmosphere, I had to be extremely steady and accurate. I was able to lock onto a target without deviating more than 7/1000th of an arcsecond, or about the width of a human hair seen at a distance of 1 mile and I transmitted about 150 gigabits of raw science data every week. I cost $1.5 billion just to build and launch into orbit. Gosh, I don’t know; do you think I’m capable of mopping up a juice spill, Carl? Do you??”

The manager stared back silently until the telescope muttered, “Yes sir, I’m on it.”