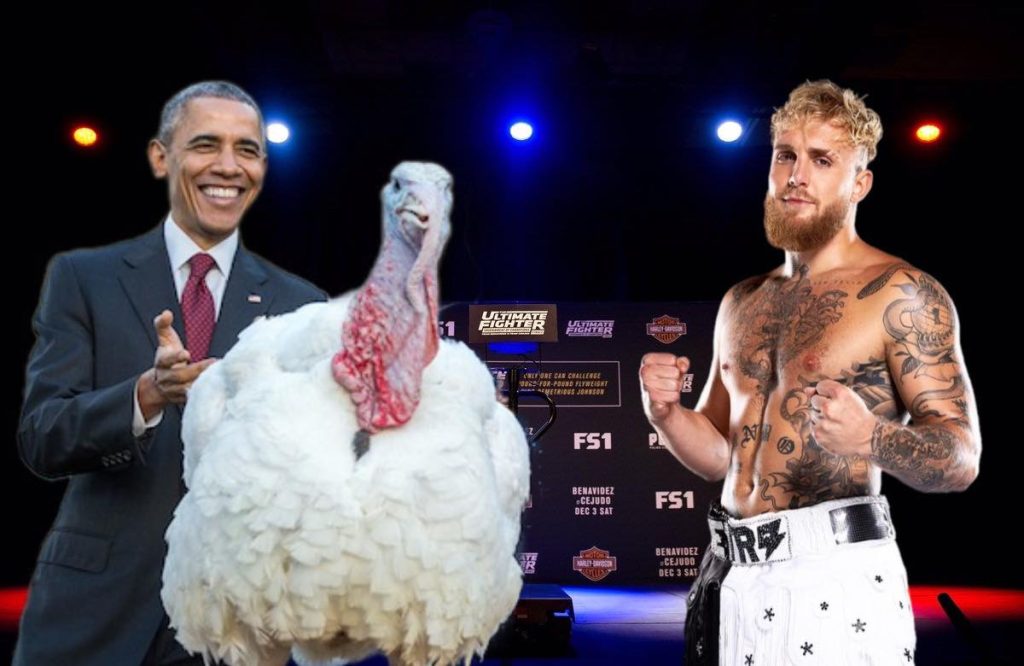 YouTube internet sensation turned professional money grab boxing douche, Jake Paul has his sights set to gobble up some serious Pay-Per-View profits this holiday season. Often criticized for his startling, if not obvious cash grab boxing matchups, some sports aficionados say Paul (25) is a complete tool bag mommy cuck who can’t or won’t fight another professional boxer like himself and now is refusing to fight within confines his own species, much less his own (boxing) sport.

“I mean, I used to like the guy, but what’s next? Is he going to hit my grandma? That’s my grandpa’s job and JAKE PAUL AIN’T MY FUCKIN’ GRANDPA!”

-Mikey from NY (We inferred the NY)

“It’s disgraceful. You can’t control them. Back in my day we’d never have let the talent rake in this much of the profit.”

– boxing promoter, all of them

The Obama pardoned Turkey (2016) known as “Tater” is expected to come out of retirement from his Virginia home at “Gobbler’s rest” and begin a strict regimen of training that will include 6 to 8 hours a day of basting along with a foie gras style diet.

TNF: “Why all this basting and force feeding before the fight?”
Ted: “I’m just trying to make him as delicious as possible. I mean he’s a 9-year-old Turkey who’s blind in both eyes and snagged his penis on some rusty chicken wire last spring. I just figure when that YouTube boy is finished with him, I’d like my family to be able enjoy what’s left over.”
TNF: “HAHA! Leftovers! NOM, NOM, NOM!”
(A wealth of uncomfortable silence.)
TNF: “So then… you’re not preparing him for the octagon, but rather the dinner table!?”
Ted: “Yes, and it’s a boxing ring, okay. The octagon is for UFC fighters and Jake Paul would never fight MMA. He’s a fucking pussy that’s fighting an elderly, blind & dickless bird.”

The fight dubbed “The Thrillah at Gravy Dinnah” will take place at Amalie Arena on Black Friday November 25th at 8pm EST and will be widely available via the dark web as it is clearly animal abuse.

Jander Gray is a comedian from Tampa, Florida. He's the kind of guy you'd share beers with at a BBQ and listen to his stories. Jander’s style of comedy has been described as intelligent & insane, but mostly funny! @grayjander in Instagram @jandergray on Twitter

View all posts by Jander Gray →