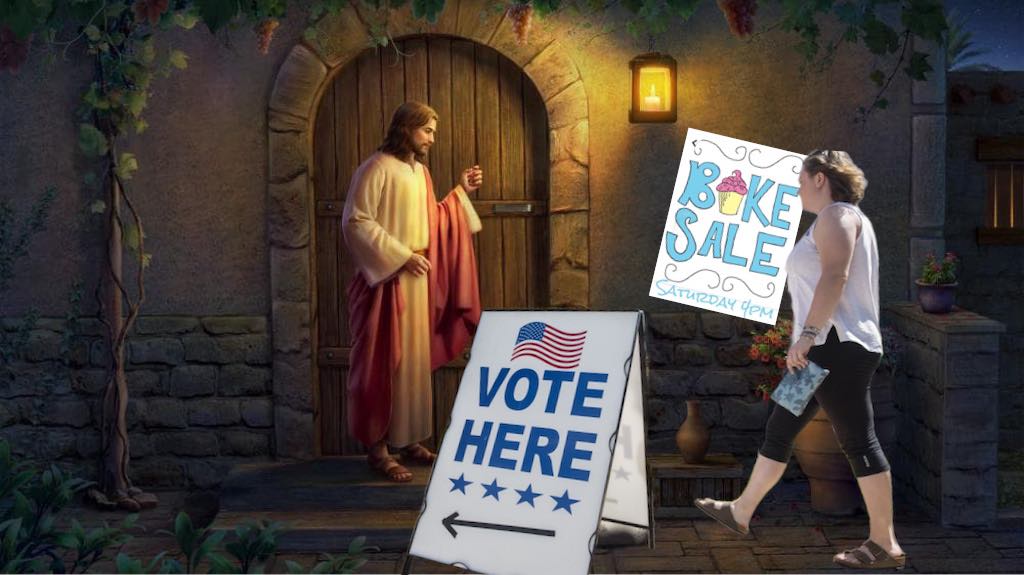 Jesus Christ, the central figure of Christianity, the world’s largest religion, who many believe to be the incarnation of God the Son and the awaited messiah as prophesied in the Hebrew Bible, was turned away from an election polling place in the Riverbend neighborhood in Tampa this morning.

Arriving at St Chad’s Episcopal Church on Albany Avenue at around 7:45 this morning, the savior was informed by a volunteer that without a valid photo ID with signature, he would not be allowed to cast votes in today’s 2022 midterm elections.

ELECTION VOLUNTEER: I’m really sorry, but without being able to confirm your identity, we can’t allow you to fill out a ballot.
JESUS: If ye had known me, my Father also ye would have known, and from this time ye have known Him, and have seen Him.
ELECTION VOLUNTEER: That’s fine, I’m sure your dad is very important. But we not only can’t verify your identity, we don’t know where you live. This might not even be your precinct.
JESUS: You are from below; I am from above. You are of this world; I am not of this world.
ELECTION VOLUNTEER: Right. So you see what I’m saying.
JESUS: Let not your hearts be troubled. Believe in God; believe also in me. In my Father’s house are many rooms. If it were not so, would I have told you that I go to prepare a place for you? And if I go and prepare a place for you, I will come again and will take you to myself, that where I am you may be also. And you know the way to where I am going.
ELECTION VOLUNTEER: Okay, you too. Yeah, we’ll be here ’til 7 tonight, so come on back once you get squared away. See ya.

Asked if it was unusual for Jesus to be denied access to a church of all places, Craig Latimer, Supervisor of Elections for Hillsborough County said, “Under normal circumstances, sure. This isn’t really a church function, though. It’s kind of a one-off , secular government, separation-of-church-and-state kind of deal. We’re just utilizing a public gathering space and trying to reduce any possibility of voter fraud. Not that we’re saying the Son of God would commit voter fraud. But, you know, these are unprecedented times.”

Leaders for the Democratic and Republican parties expressed disappointment because both sides are convinced Jesus would have endorsed their tickets exclusively. However, Jesus speculated that both parties would probably be very surprised and disappointed with his ballot.

“No one can serve two masters. Either you will hate the one and love the other, or you will be devoted to the one and despise the other. You cannot serve both God and money,” said Jesus. “Besides, I’m mostly interested in the County Transportation Surtax Referendum. For me sake, public transportation here blows.”

Unrelated, he also expressed interest in catching an advance screening of John Jacobs’ forthcoming film “Dying On The Cross” while he’s in town.