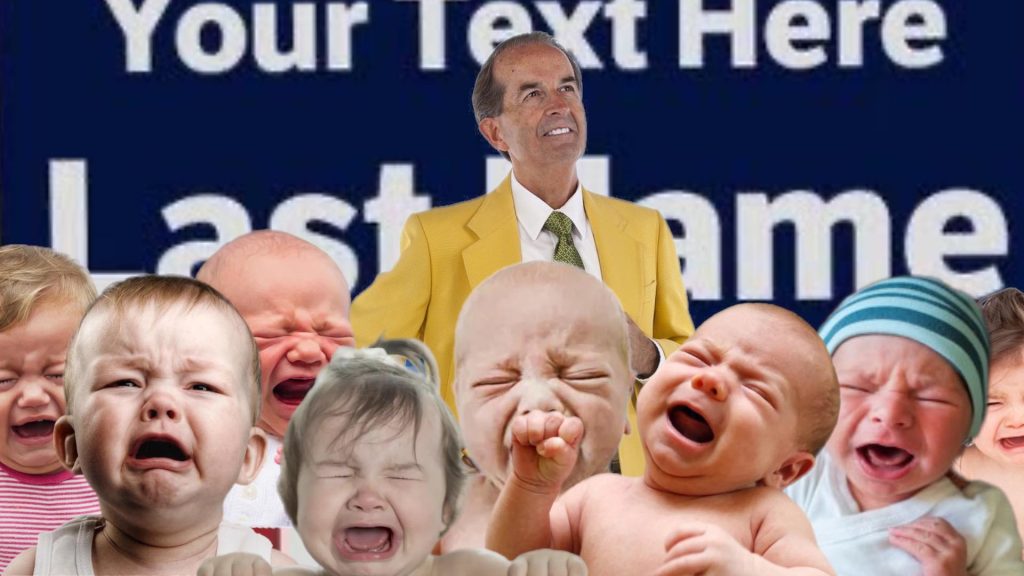 A group of babies led by one child prodigy who is able to speak and communicate with other babies despite being only 3 months old, have begun cancelling the politicians who have kissed them against their will at campaign rallies.

“Just because our parents have held us out towards the politicians does not imply consent.” Said the head baby of the group who will remain unnamed because it’s a minor.

“For generations babies have been used as fodder in the theater of politics against our wills and it must happen no more.” Said the genius baby.

“If someone picked you up and shoved you into an old mans face would you be ok with him kissing you?” The baby asked me.

“Exactly. So why is it ok, when it happens to us? I’ll tell you why. It’s because we can’t talk. We can’t say no. Until now. That’s why we’ve formed BAPK. Babies Against Politician Kisses. From now on, every time a politician kisses a baby, it will be documented, and once that baby learns to talk, it will be given the option to press charges. Strangers kissing babies is cruel and unusual, it doesn’t matter if the person doing it is running for comptroller, it does not make it ok.” The baby said firmly.

“I completely agree.” I said.

“Can I get one little smooch though? You’re so cute.” I joked.

The baby was extremely offended by my joke.

“You’re no better than them are you!” The baby began having a tantrum and throwing spaghetti noodles at me that were just placed on its high chair for its noon snack.

“I’m sorry, I’m sorry, I just like making jokes, I thought I could make one with you, you know because you’re a mature, smart, baby.” I apologized.

The baby then soiled its diaper.

The babies parents were nowhere to be found, so I was forced to change the benevolent baby’s diaper.

Then a drivers license fell from a little pouch attached around the babies shoulder.

I picked it up and inspected it, and it revealed that the baby genius was actually a 34-year-old man with dwarfism.

“What the-“ I said stunned, now looking up at the baby/man recognizing it’s more developed, non-baby-like-features.

“I’m not a baby! I’m a grown man with dwarfism! But that doesn’t change the message! It’s wrong for politicians to be kissing babies!” He ranted.

While he was talking I googled his name and it turned out he was wanted for felony income tax fraud, and I silently texted the police from my cell phone with one hand in my pocket.

“Yes, of course,” I agreed, trying to stall for time until the police showed up.

Then luckily within a few moments, swat officers busted down the door of the room I was conducting the interview.

“There you are scum bag!” An officer shouted, tackling the dwarf and putting him in tiny hand cuffs.

“You ratted me out!” The dwarf screamed at me.

“I’m sorry! You’re wanted, and there was also a reward attached for turning you in and I need money!” I rationalized with the dwarf.

The dwarf spit at me and cursed me as he was dragged away by police.

The spot for the head of BAPK was now open.

Seeing as all the members are babies I declared myself the new leader of BAPK, and would in turn accept the annual salary of $35,000,000 which seemed to be coming from some unknown source.

I’m now the head of that group that I made up for this article, but did you know that by just saying something out loud, (or in this case typing it) you make it exist?

The law of manifestation clearly states, “If you say something it know becomes real.”

So by those rules, everything I say comes true, and when you read it, you further validate its validity.

You ever read this far into the article and think, “Is this a waste of time or did I get any joy out of this?”

I think if you laugh at least once it’s worth it.

Or if you chuckle or giggle.

It doesn’t even need to be a full audible laugh.

Just a mental stimulation of any sort.