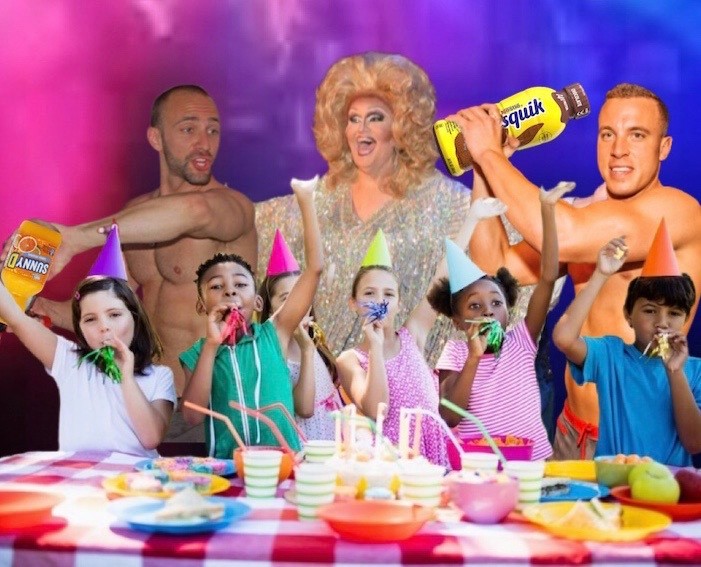 “Totz”, a new gay bar catering exclusively to children, has opened on 7th Avenue in Ybor.

Owner and manager Rico Freddy said, “It’s not really a ‘gay bar’ per se. I mean, it is a bar and it’s for gay people and it’s staffed by gay people. Huh. Well, I guess by definition it actually is a gay bar per se.”

However, Freddy said there are key differences between Totz and other gay clubs in Ybor. “We don’t serve alcohol because all of our customers are minors. And the focus here isn’t as much on sexuality as it is on that being one aspect of an individual’s identity, albeit a crucially important one. Many young people begin asking questions about this at a very early age,” he said. “This is a place where those youngsters can gather and feel comfortable and safe being themselves in a social setting. We’re not counsellors but I feel we do provide a valuable resource to an underserved, underrecognized community that doesn’t have that many.”

Another difference is that Totz doesn’t cater exclusively to gay kids. “We don’t expect any of these children to have completely figured out their sexual identity at this age. Hell, some people never figure it out!”, he said. “So kids of all orientation are welcome, even if they don’t realize they have an orientation yet.”

This doesn’t impress one of Totz’ regular customers, 10-year-old Kevin Gidders. “So what? Straight people go to gay bars all the time and it’s no big deal. My dad is completely straight and he goes to Bradley’s every weekend. The fact that he and my mom never talk about it doesn’t mean anything”, he said, before he quickly added, “MY DAD ISN’T GAY! I KEEP TELLING YOU THAT AND YOU DON’T LISTEN TO ME! HE COACHES FOOTBALL!! I HATE YOU ALL”, and stormed out. Freddy said that happens at least once a week. “Typical Kevin. He’s very dramatic. He’ll be okay. Eventually. I hope.”

Another regular customer is 8-year-old Denika Claysworth who said she’s already pretty sure she likes boys. “I think the bartenders are cute”, she giggled. “They look like superheroes.”

Drag performer Gloryhole Vanderbilt is at Totz a couple of times a week and said the atmosphere is different than other venues that present drag shows. “I have to scale back my language and some of the more risque elements of my show; the kids all just call me Miss Vanderbilt and that’s cute, although a little weird for me. I’m used to being referred to, usually fondly, as ‘Bitch'”, she said. “Also I’m not crazy about lip-syncing songs from Kidz Bop but hey, that’s show biz.”

As might be expected, there are people who are not happy that Totz exists. “If these kids need to feel ‘safe’, they should learn the absolute certain fact that God will inflict His vengeance by condemning them to eternal suffering for being the way He made them because He loves them. What could be more comforting than that?,” said Rudy Ponzleton, of the First Church of Obnoxious Signs, Bullhorns and Generally Getting In People’s Way, which holds services evenings, at the corner of 7th Avenue and 16th Street in Ybor. “And don’t you dare label us as bigots; we hate all gay establishments and the filthy degenerates that patronize them. We hate them all equally, not just this one. We do not discriminate,” he idiotically added.

Parents who let their kids hang out at the club appreciate it for what it offers. “My 15-year-old daughter Lori is struggling with some things right now but coming to the club seems to be helping her. There’s no smoking allowed and the age restriction keeps would-be sexual predators out so I feel the kids are as safe here as they could be anywhere”, said Charlie Murthing of Temple Terrace. “I told the owner he should change the name to ‘Gay Care’! Ha ha ha! Get it? Like ‘Day Care’ but for gay kids. No? Okay, then. I’m sorry. As a dad, I’m still figuring stuff out too, such as what jokes I can make. Man, I wish somebody would open a club for parents like me.”

Freddy says he does have plans at some point to open a club called ‘Daddiez’, also in Ybor. “It’s not going to be what Mr. Murthing is looking for”, he says. “But Kevin’s dad is going to love it!”