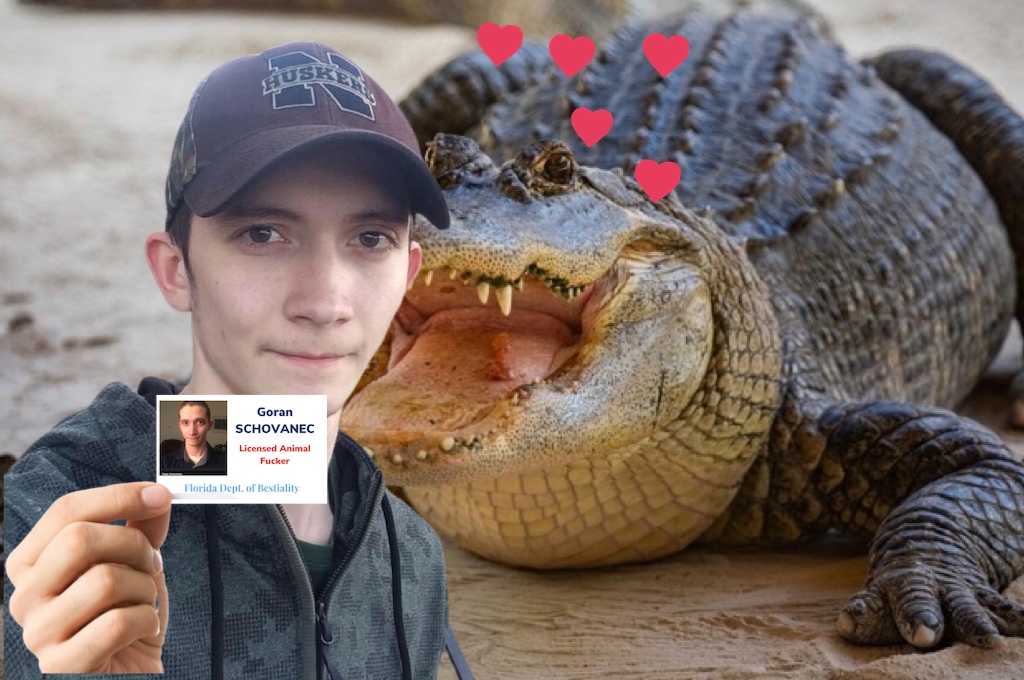 Amendment 9 allowing residents to fornicate with swamp lizards passed and now, with a medical license, anyone in Florida can have sexual relations with alligators (and crocodiles.)

The bill was brought to congress in 2013 after the Mendelson-Winschitz family lobbied heavily after their billionaire father, Anthony David Mendelson-Winschitz, had been indicted for beastiality on three different counts and had paid the finest lawyers to litigate his sentence to time served.

“We were tired of our father, who supports us financially, getting into legal trouble and having our trust funds frozen while he was incarcerated.” Said Cleetus Mendelson-Winschitz III through a payphone which he instructed me would ring near the paintball field on State Road 19.

Sex with the animals will now be legal if you go through the process of attaining a license, which includes a free psychological analysis with a professional trauma doctor.

“I’m not sure what drives people to make love to their pets and stray animals, but it’s definitely something to do with their psyche.” Said Dr. Kenzie Verbatim, the lead psychologist from Tom Clancy’s School of Psychology.

“It may be that they can’t tell anybody, so these people trust them with their secrets. You know Michael Jackson liked animals for that very reason, he said they couldn’t judge him, and I believe him.” Verbatim said as she tipped her crocodile Dundee hat back and shifted the toothpick between her teeth.

Having sex with a gator without a license will now be a minor fine of $30, and a class you must attend after three infractions.

“Yea, this probably won’t change too much in the state.” Said Jr. Police Chief Seinfeld Curtaincall.

“In fact, I don’t think anything will change at all.” He finished.

Now that gator sex is becoming accepted, beastiality enthusiasts from all over the spectrum have started lobbying their cases of why they should be allowed to sleep with creatures such as Orca whales and Cockatoos.