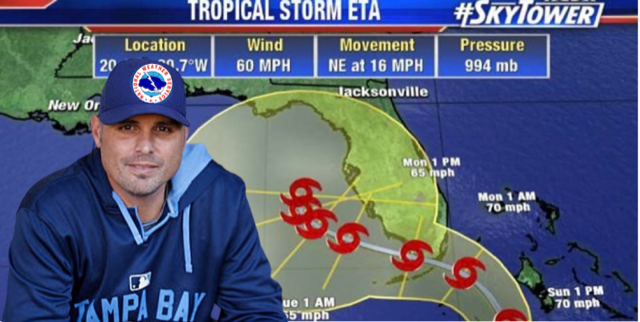 In anticipation of Tropical Storm Eta strengthening again into a hurricane that could directly impact the Tampa Bay area, the National Weather Service (NWS) has hired Tampa Bay Rays manager Kevin Cash as a special consultant.

“As a federal agency tasked with providing weather, water, and climate data, forecasts and warnings for the protection of life and property and enhancement of the national economy, we want to take every step possible to keep people and their homes safe. Ideally, the best way to do that would be to stop a storm before it can do actual damage. That’s not an option we ever really saw as feasible before”, said NWS spokesperson Stephanie Altostratus. “But Kevin Cash is a guy who has some proven recent expertise under similar circumstances.”

Eta originated from a tropical wave in the eastern Caribbean Sea that developed into a tropical depression late on October 31 and was officially named a tropical storm early on November 1, becoming the record-tying 28th named storm, 12th hurricane, fifth major hurricane and most powerful tropical cyclone of the unusually active 2020 Atlantic hurricane season.

The storm has been extremely powerful from the beginning but seems to be getting stronger as time passes and it approaches Florida via the Gulf of Mexico. It peaked previously at 150 mph (240 km/h) and 923 mbar (hPa; 27.26 inHg) as it slowed tremendously off the coast of Nicaragua early on November 3, making it the second-most intense November hurricane on record, behind only the 1932 Cuba hurricane.

“Oh yeah, I know exactly what to do here”, said Cash as he consulted a variety of speculative analytical spreadsheets before getting on a boat and heading out to replace Eta with a new, well-rested but unproven tropical storm. “I got this”, he said.

Not everyone is on board with the unorthodox methods espoused by Cash. Veteran traditional meteorologist Earl Weavervane said, “I don’t care for this newfangled approach to weather. You’ve got a storm out there with sustained high winds, bringing rain, wind, storm surge and high surf to parts of Florida. You need to see how it handles high and low pressure and let it all play out. Weather takes place in the skies, not on a computer.” Weavervane spit a stream of tobacco juice into a Gatorade cup and said, “You either have a gut feeling about this kind of thing or you don’t. I wish him success but I don’t know if this Cash kid has what it takes”.