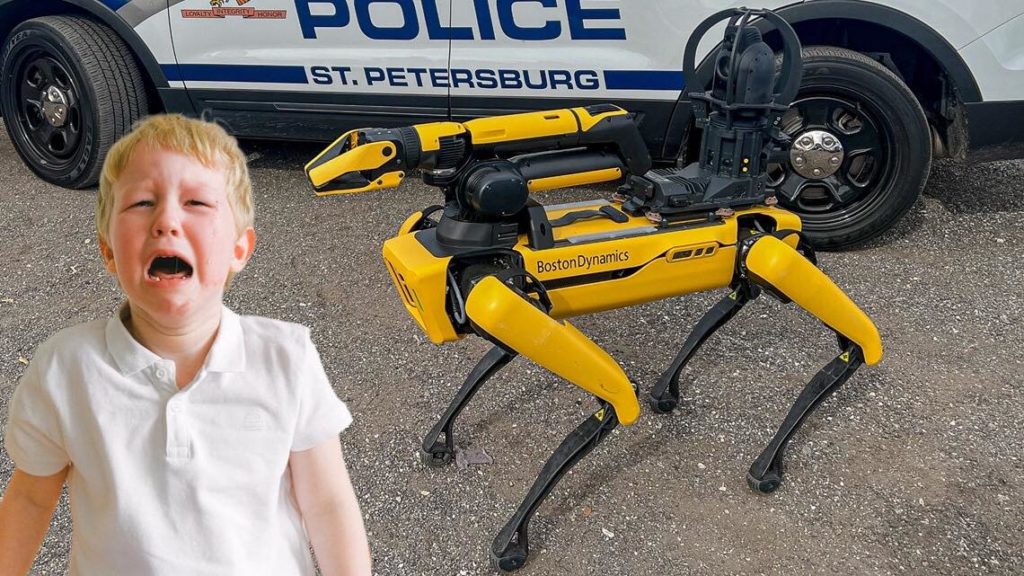 “That doggy isn’t very nice,” he said through tears.

Gyler was minding his own business as his meth-addled father Gregor was holding he, his mother and his infant sister hostage in their home on St. Pete’s south side when SPOT, created by Boston Dynamics and donated to the police department by the Speer Foundation and Realty One Group climbed the stairs to the family’s apartment and used its robot face/appendage to wrench the front door open. At that point, SPOT came upon young Gyler who was playing with Legos and addressed him through its intercom system.

SPOT: Come out now, unarmed and with your hands above your head.
GYLER: Hi doggy! Do you want to play with me?
SPOT: Comply with the instructions immediately.
GYLER: (throws ball) Fetch, doggy!
SPOT: Sir! Do NOT make any sudden or aggressive gestures or we will have no choice but to respond with force!
GYLER’S DAD GREGOR: Who the (bleep) are you talking to you worthless little… Oh (bleep)!! Robot dog! (fires shot, misses)
SPOT: All units move in! Go! Go! Go! Breach!!
(Glass breaking, unintelligible shouting general sounds of mayhem)

Police officers entered the dwelling and shot Gregor McPhadden 11 times because SPOT is not a weapon. Gyler’s mother was also mortally wounded when she tried and failed to protect her husband. Gyler and his infant sister have been placed in separate foster care facilities.

“Why wouldn’t the doggie play with me?” sobbed Gyler as he was led away by SPOT to his new ‘family’.