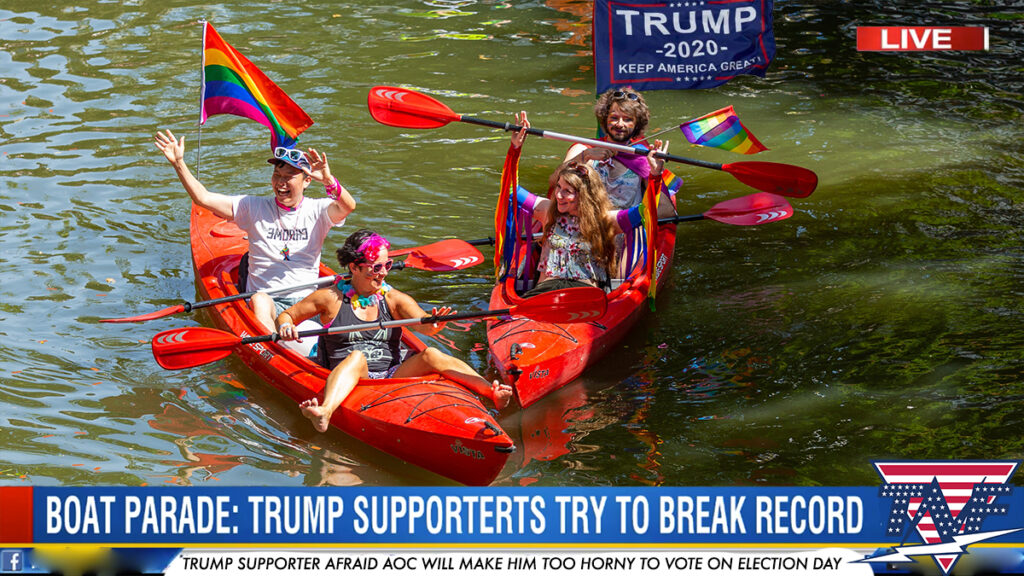 Hundreds of boat owners descended on Clearwater Beach today for the biggest gathering of closeted homosexuals who support president Trump.

“We needed 1,180 boat owners who haven’t come out of the closet today,” said event organizer Shuck Pipk. “We have well over a dozen more than what we need.”

Pipk then tossed me a White Claw and asked me if I wanted a tour of his boat.

I agreed, but as soon as I got on his boat he turned the engine on and set sail towards the mass boat gathering.

“I thought this was going to be a boat tour, I didn’t want to be a part of the flotilla!” I yelled at Pipk, who pretended not to hear me.

We soon entered what Pipk called the “International Waters of the Gulf of Mexico” and he tried to explain to me that there weren’t any rules if you’re on a boat on Clearwater Beach.

“I haven’t told my family yet that I’m leaving them because of my sexual orientation,” said Pipk, who was honking his boat horn at fellow boat owners who had painted pro-Trump slogans on their vessels. “Out here, I can be who I truly am, but I’m scared that my conservative roots contradict a lot of what I feel.”

Pipk tossed me another White Claw and tried to get me to take my shirt off.

I obliged because it was hot out and the Claws were starting to affect me.

I then watched passing boaters honking and yelling their own slogans.

“Lock her up! Kamala is man, and even if she is not I would totally hit it because I’m a heterosexual man!” Yelled a passing boater who immediately threw up after saying that. The boater then composed himself and continued yelling, “She sounds like Marge Simpson and that’s a bit of a boner killer for me, so I retract my last statement.”

The boater then began doing donuts on his boat, which surprised nearby boaters who had to drunkenly swerve out of the way.

This caused a massive wave that tipped over one of the boats, a mass of jet skis that were speeding by got caught in the wave and crashed violently.

The flotilla then began dispersing, causing many more boat crashes.

Over 300 people were rescued by nearby cop boats.

100 people are currently in critical condition and receiving holistic treatment at a nearby Scientology hospital.

Pipk came out to his family and they have decided to work it out.