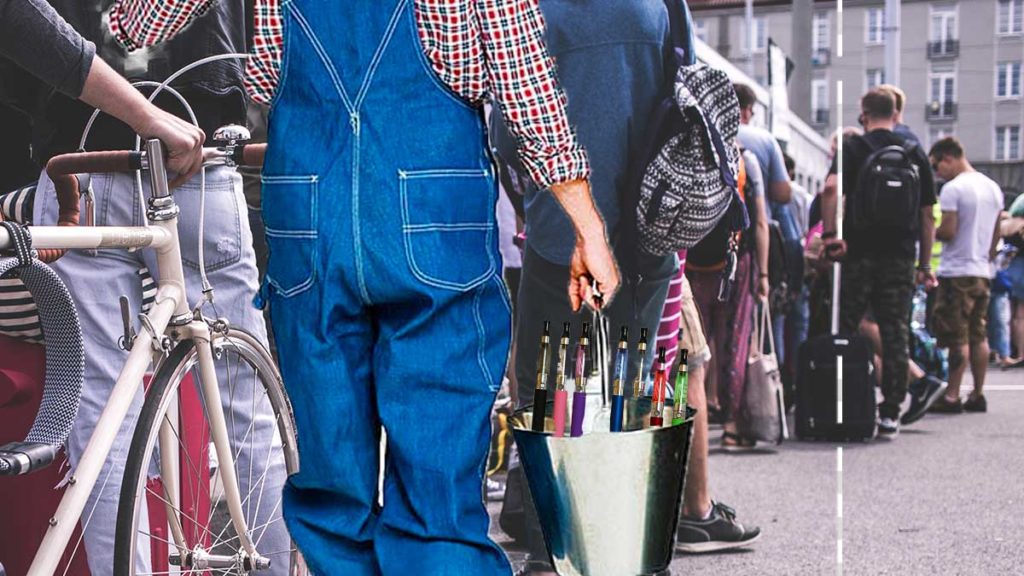 Hawaiian Vape owner, Richard Cranium, claims it’s all because of the recent health scare that vaping has caused. “I opened up Vapor four months ago and business was good, but then people started getting sick and now there is talk about outlawing kid oriented flavors” Cranium said. “I can see the regulations coming and I just ordered 100 cases of non-returnable ultra-high-nicotine cotton-candy flavored oil. What could I do?”

“I had a problem, I can’t return these sweet flavors. I can’t dump it in the rain gutters, if it makes it to the bay you don’t know how the dolphins will response to the nicotine. Then I noticed it was a long hot summer and three weeks ago I saw some kids enjoying a cotton-candy Kona Ice. It just hit me. I have 100 different flavors that Kona doesn’t sell and most with high-nicotine or CBD,” Cranium explaining how he came up with his unique solution.

The next day, Cranium made his first vape-oil flavored snow cones and gave them away at a birthday party for one of his neighbor’s kids. “The parents and kids just loved them.” The parents kept coming back for CBD & coke, the soft drink, and the kiddos loved the cotton-candy. He changed the name of Vapor the next morning and started handing out free samples. The line formed within a week. “I’m fairly certain I have some addicted Flag Members in this line”, nothing that the Scientology Flag operation was just down the street, winked Cranium.

Cranium is hoping John Morgan sponsors a bill to legalized LSD. He thinks CBD & Acid will be a big draw to the boomers who want to relive Haight-Ashbury. “They bring in their great-grand kids for a cotton-candy all the time and so far nothing has caught their eye.”

LeRoy Alaways is currently a stay-at-home dad of 5-year old twin girls. His before kids’ life includes rocket scientist, legal whore (expert witness), mechanical engineering professor, and sport scientist. His most famous work is on the Aerodynamics of Curveballs and is in the library of the National Baseball Hall of Fame.

View all posts by LeRoy Alaways →