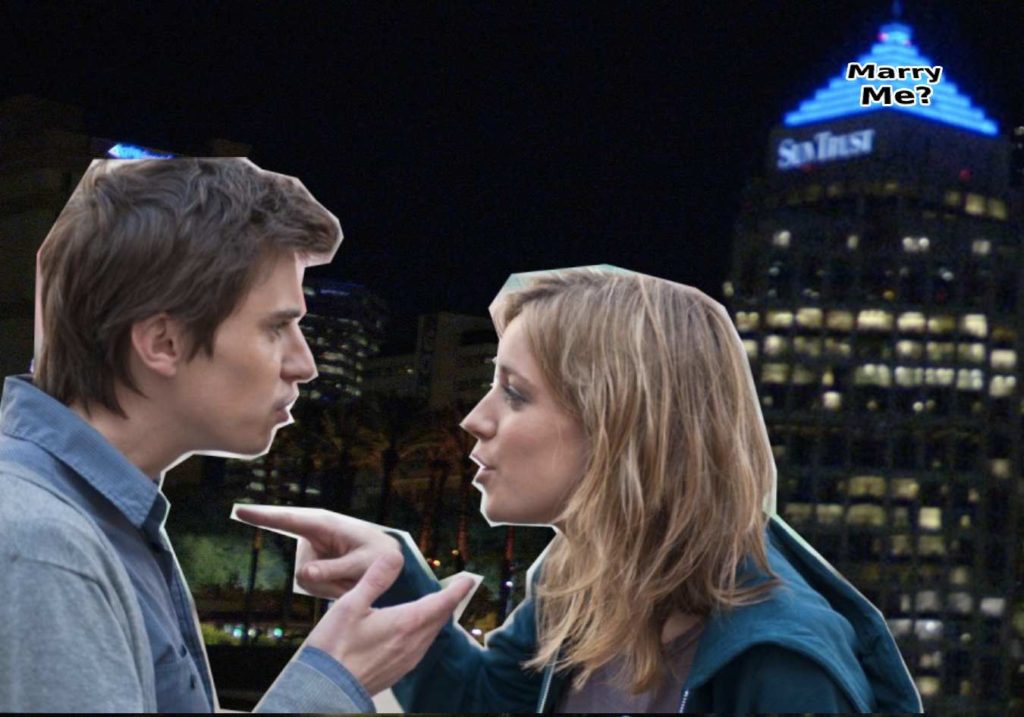 On a Thursday night after a mediocre meal at a crowded pho boutique, Reggie got ready for the moment of his life. He had spent 20 grand to make sure that the lights at the top of the SunTrust building in downtown would read, “Will U Marry Me Larissa?” at 8 PM.

It was 7:59 PM and they were arguing about whether or not the skating rink at Curtis Hixon park would be open, even though it’s January and it’s totally gone.

Reggie wasn’t able to explain that concept to Larissa well enough, so she demanded they walk to the park. Reggies Samsung phone dinged. It was his reminder. “Time to pop the Q.”

He turned to Larissa and started to shake her. “Baby! Shut up for like 2 seconds! Look the ice-rink isn’t there, I told you! Why would I act like I know this stuff if I didn’t actually know this stuff. Every year it’s basically gone after Christmas, I don’t think they’ve changed the policy this year. Now look at the SunTrust building.”

Larissa slapped him in the face then turned. “What?” The words scrolled across the building perfectly. “Are you kidding me? How much did that cost you?”

Reggie responded, “I don’t want to tell you.”

Larissa started taking her earrings off. “You’re going to tell me, or you’re going to wake up in the hospital. You can afford to waste money on lights but you won’t take me to Red Lobster? You’re a monster.” She stormed off around 8:01 PM.

“Looking back on it, I’m happy I did it,” says Reggie, as he plays one-hand catch with an apple. He takes a big bite out of it. “I feel healthier.” He says with a mouth full of apple. “I mean, if she can’t appreciate me putting her name in lights in the middle of the city. She’s not the one. I can find a woman who would appreciate opulent extravagance. In Tampa? I know she’s out there.”

For information on how to rent the SunTrust lights to propose to your girlfriend, don’t, because this is fiction and you shouldn’t bother SunTrust.