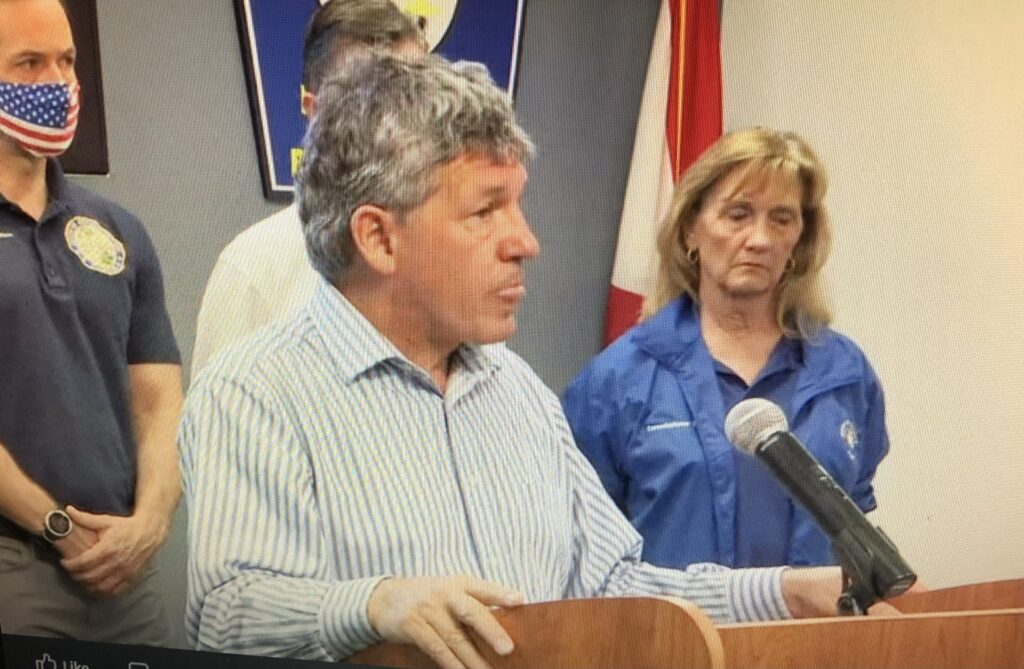 Commissioner Vanessa Baugh, who represents District 5 in Manatee County appeared to be giving a reasonable amount of sincere interest during a televised briefing on the ruptured wall of a retention pond holding 800 million gallons of water containing phosphorous and nitrogen at the old Piney Point phosphate mining property.

“This is a very trying time for those of us in Manatee County,” she said. “Especially for me because from all the charts and maps I’ve seen, Lakewood Ranch does not appear to be in danger. So it’s difficult for me to act like I give a flying fuck.”

Baugh made news in February when emails surfaced that showed she had not only advocated for the county’s largest COVID-19 vaccine distribution site to be located at Lakewood Ranch, the affluent, mostly white real estate development in southern Manatee County, but that she had also submitted a VIP priority list with her name and and some wealthy campaign contributor friends.

“It’s very important that I get some of that stink off of me; I can’t afford to look that bad again so soon”, she said. “That’s why I’m wearing this official Manatee County disaster response windbreaker. When someone puts on a windbreaker, you know shit is getting real.”

She made a point of rolling the jacket’s sleeves up her forearms, grabbing a folded, blank sheet of paper to hold and winked before strategically positioning herself in clear view of the camera during this afternoon’s livestream media briefing.

“Sometimes, when I need to look sad or concerned or whatever, I think about that time I had to settle for shitty seats to see ‘Hamilton’. All the way up in the mezzanine,” she said, fighting back a sob.

During the briefing, she was seen sometimes nodding her head in agreement with what was being said and pursing her lips. “They teach you that shit in improv classes”, she said.

A public safety warning was issued Friday afternoon, stating “Evacuate the area NOW. Collapse of Piney Point Stack is imminent. Immediate evacuation of Chapman Road to Airport Road and US 41 to O’Neill Road. Leave area IMMEDIATELY.” Governor DeSantis has already declared a state of emergency for the region.

The Florida Department of Environmental Protection had dispatched crews to assist with an attempt to block the leak, but Manatee County Public Safety Director Jacob Saur said during Saturday’s briefing that it doesn’t appear to be holding and that the gypsum stacks are unstable and could collapse “at any minute.”

“It’s just a shame we weren’t able to get in front of this sooner in order to prevent it from happening”, said Commissioner Baugh. “I had suggested plugging the leak with some whiny, pain-in-the-ass poor people but nobody else thought that was a good idea. I don’t know why not; we sure have enough of those motherfuckers.”