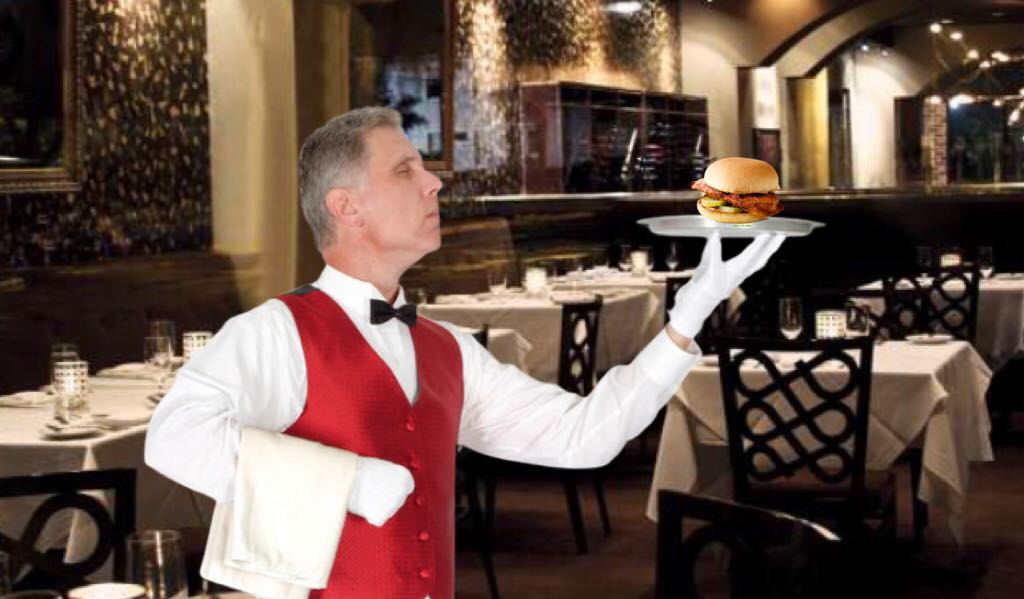 In an attempt to capitalize on the current ongoing competitive trend among fast food restaurants, Tampa’s upscale Mise en Place is introducing a new, upgraded ‘premium’ chicken sandwich to their menu.

“While we routinely receive 5-star reviews for our cuisine, nobody ever gets into a fistfight over it”, says manager Philip LeSchwanz. “The closest thing we ever see to that is when some cad says something inelegant to a lady and she gasps, slaps his face and storms out, leaving him chagrined and alone. That’s about to change!”

The trend started when Popeye’s introduced their new sandwich in 2019. It was an instant sensation, prompting a social media frenzy and a nationwide shortage of chicken that made the sandwiches unobtainable for several weeks and inspiring physical confrontations between people trying to get them.

Since then, Wendy’s, McDonald’s, Zaxbys and KFC are among national chains that have released their own upgraded versions.

“No offense to those establishments, but obviously our sandwich is going to automatically be better”, said LeSchwanz. “I mean, be serious; we’re Mis en Place!”

Eager anticipation from the chicken sandwich-loving public who are just hearing rumors about this new item would indicate that he’s going to be right.

“I really wanna try that bitch”, said self-avowed fast food chicken sandwich connoisseur Greg Betts of Tampa Heights. “I bet it’s on a brioche with Gruyère cheese and a raspberry glaze reduction and shit. Pair that up with a side of truffle parmesan fries? That’s gonna be good as hell.”

“Shit yeah,” agreed his next door neighbor Clifton Whitfield. “If you’ve ever seen what those motherfuckers do with vanilla gelato, Kahwa espresso, hazelnut syrup to create their affogato, you just know they gon’ fuck up a chicken sammie!”

LeSchwanz said, “Well, actually it’s going to be a more, umm, traditional recipe, in lieu of something extravagant.”

An employee of the restaurant who spoke to us on the condition of anonymity said, “Yeah, it’s a Tyson chicken patty on a hamburger bun with dill pickles and mayo. It’s not spicy and there won’t even be lettuce or tomato. But it is Duke’s mayo, so…”

Mis en Place’s new, ‘premium’ chicken sandwich is expected to be priced to sell at $21.50.