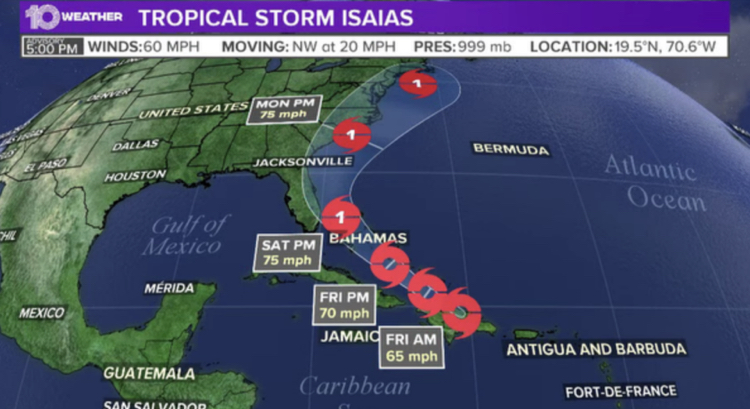 Isaias had 60mph winds as of 5AM Thursday morning, with the center off the southwest coast of Puerto Rico. Various computer models were still unable to determine a clear, definite path for the storm but it would appear at least the east coast of Florida will be impacted.

“Good!,” says George Diwiki of South Bend, Indiana. “Maybe this will finally wash that wretched, COVID-infested blotch off the map for good.”

Experts fear similar opinions could push the contempt level to Category 5 by the time the storm makes landfall. “Hatred for Florida has been Cat 3, approaching Cat 4 ever since the whole ‘hanging chad’ nonsense during the 2000 presidential election”, says Dan Climwad, an expert on popular opinions. “People who don’t live in Crazytown, USA, aka anywhere outside of Florida, have had about enough of the shenanigans. There’s still time for somebody to do something really stupid before it hits; I could easily see the level hit a 5.”

“I’m sick to death of ‘Florida Man’ stories”, says Wally Anderflack of Sacramento, California. “Every once in a while they’re kind of amusing, but enough already. It’s obvious they’re not going to get their shit together; scattering it into the Gulf of Mexico shouldn’t have much of a negative impact.”

“I don’t think any actual human beings live there. I think they’re all just possums who learned how to walk upright”, says Kathy Dillon of Santa Fe, New Mexico. “The state motto should be ‘Teneat Dolor Meus’, which is Latin for ‘Hold My Beer’.”

“Buncha morons down there,” says Debra Kightlinger of Buffalo, New York. “Plus, the whole place is full of nothing but morons and criminals and real estate swindlers and morons. I know firsthand; I have a timeshare in Clearwater.”

A man identifying himself as Rickard Scott from Washington DC said in an obviously fake voice, “I wouldn’t mind if it got rid of some of the poor people down there.”

“I’m really, really tired of ‘Florida Man’ stories”, says Wally Anderflack of Sacramento, California, again. “I know I already said that but I want people to know. Sorry. It’s all just so tiresome.”

“Florida is the penis of America. Look at it!”, says Kevin Sullivan of Boston, Massachusetts, smirking before turning serious. “And I’m not saying I want to lose our penis, but I could do without most of the people currently living on it.”

Bill Fraygo of Columbus, Ohio echos a somewhat similar sentiment. “I hope the whole thing is wiped clean and then somebody can go in there and turn it into one big golf course. I’d go down every winter if that happened.”

Others assessments aren’t quite as harsh but are still less than empathetic. “I guess ‘Tiger King’ was pretty cool”, says Marianne Hudspeth of St. Louis, Missouri. “But then you’ve got Ron DeSantis and Rick Scott and all that meth-fueled crime. Plus it’s a Coronavirus hot spot. Maybe this is for the best.” She added, “I’d miss Busch Gardens, though.”