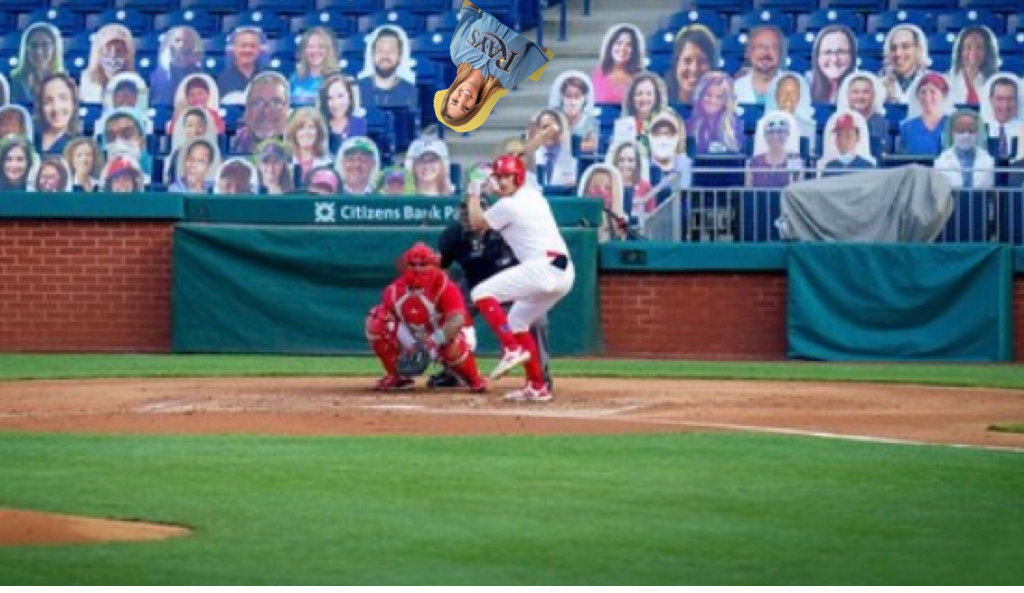 A cut-out photo of a Tampa Bay Rays fan was assaulted while attending a game between the Miami Marlins and Philadelphia Phillies at Citizens Bank Park in Philadelphia Sunday.

“The other cut-out fans were so mean!”, says the Rays cut-out. “I guess they thought since I’m from Florida that I must have been a Marlins fan, but I’m not! I was just there to virtually visit my aunt who lives in Atlantic City and I thought I’d catch a game while I was in the area.”

As a means of dealing with empty stands at Major League Baseball stadiums due to social distancing standards resulting from the COVID-19 pandemic, teams are making cut-out photos of their fans to be placed throughout the seating areas of their ballparks in order to simulate a traditional ballpark atmosphere.

Philadelphia sports fans are legendarily notorious for being hostile toward opposing teams and their fans.

“At first it was taunts and insults and I thought, ‘okay, I can handle this.’ I mean, I’m cardboard but I’m pretty sturdy”, said the virtual Rays fan. “But then the language got really abusive and I thought ‘Whoa! I might be in trouble here!’ That was followed by pushing and shoving. Someone intentionally spilled a virtual beer on me!”

When asked if the Rays cut-out tried to get help from stadium personnel, it replied, “There’s no ushers or security guards! It’s just us, a bunch of cardboard photos of fans staring out blindly at a baseball diamond full of real baseball players.”

Tim Rocher, an actual human Phillies fan who, of course, wasn’t in attendance says, “Honestly, the results would have been about the same if there had been ushers and security guards. They’re doing a great job of replicating the true Phillies fan experience!”

The abuse and torment continued throughout the game and came to a climax when someone pushed it down some stairs. “And then… then… one of them… pee’d on me,” says the traumatized Rays cut-out. “Those virtual people are virtual garbage!”