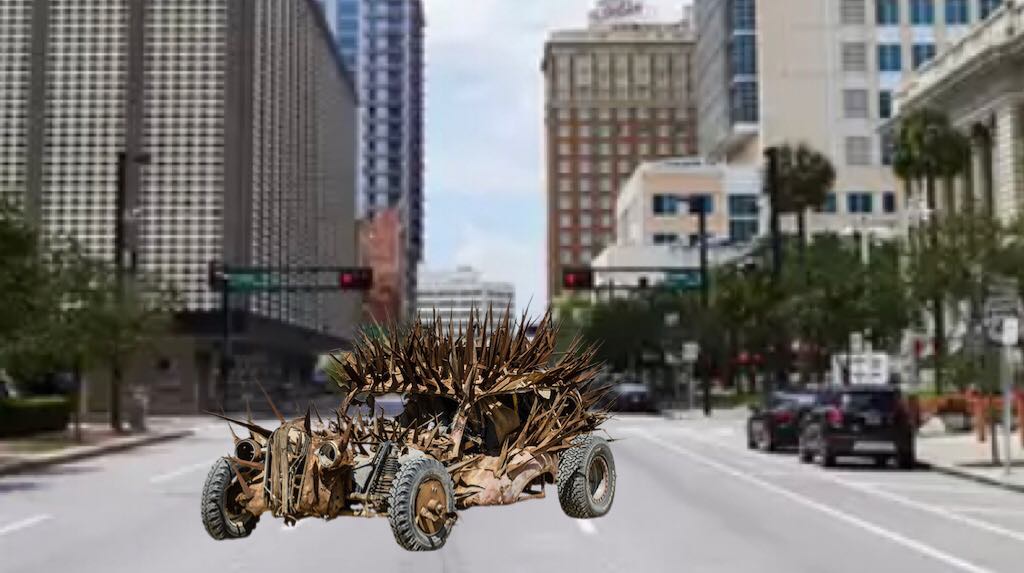 Ever since The Downtowner ceased operation in downtown Tampa on April 30, visitors and residents have been without an inexpensive rideshare option for short trips.

“The biggest problem with the Downtowner, aside from not being profitable, is that the rides just weren’t safe”, said City of Tampa spokesperson Craig Dillingsworth. “First they started out with enclosed golf carts and those things were about as sturdy as a Christmas tree ornament. They did upgrade to actual cars eventually, but with our combination of wrong-way drivers and just the general maniacs you’re sure to encounter, it was like sending someone into a gun fight with a pocket knife. I’ve been working on my metaphors lately and I think it’s starting to pay off!”

“Downtowner 2.0 is going to KICK ASS and that is not a metaphor; I mean literally!”, said Uberlyfter, who had taken off his shirt and was playing a Van Halen-esque solo on a flaming guitar. “Screw defensive driving; we’re going on the offensive! Hatchi Matchi!!”

“Yes, well… ha ha! That’s a very colorful way to say that we want people to be able to get around our fabulous downtown as safe as a newborn kangaroo in its mama’s pouch while saving enough money to make an old Jew… oh wait… let me do that one over. Shit!”, said Dillingsworth

Uberlyfter shoved him out of the way and said, “If you’re looking for a ride from Yeoman’s Cask and Pub on Morgan Street to The Hub on North Franklin and you’re willing to pay $1 to find out just how much vehicular mayhem can occur in a half mile, we’re the rideshare service for you!”, before adding, for some reason, “Wang Dang Sweet Poontang!”