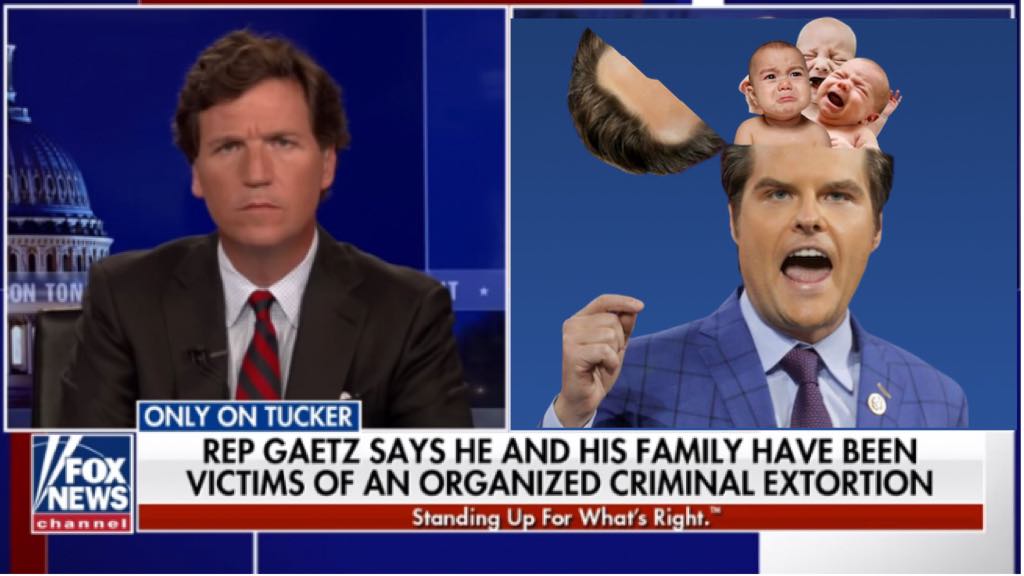 Following news that broke last night that Representative Matt Gaetz, (R) of Florida was the subject of a Justice Department investigation examining whether he violated federal sex trafficking laws, Gaetz made an appearance on Tucker Carlson’s television show to refute the accusations, during which new evidence was revealed that would seem to damage his claims of innocence.

While speaking to Carlson during the “Tucker Carlson Tonight” show on Fox last night, Gaetz was detailing how he was not a suspect in a crime, but rather the victim of a conspiracy centered around an elaborate extortion plot, when the top of his enormous head popped open to reveal three crying male infants.

“Julio! Javier! Other Julio! What did I tell you about trying to escape the confines of my cavernous cranium?”, Gaetz said, struggling to close the lid on the flailing babies.

Carlson, clearly caught off guard, said, “What the hell is that?!?”, while maintaining his trademark facial expression of deeply-addled utter befuddlement.

Gaetz, whose head resembles what could conceivably be a shipping container for a normal-sized human head attempted to deflect attention by saying, “Ha ha ha! Kids these days, you know? Listen Tucker, whether it’s paying a 17-year-old girl to travel with me and engage in a sexual relationship or transporting three live, mewling Puerto Rican babies to a mysterious man in Tampa, those are both bad things with which I am definitely not involved. You know that better than most people, Tucksie. After all, you’ve had dinner with me and the mysterious man who is definitely not paying me to transport Puerto Rican babies to him in Tampa, where he will raise them to be his slave sons. Remember? Your wife was there too, Tuckeroo.”

Carlson responded by continuing to stare blankly into some deep, unseen void.