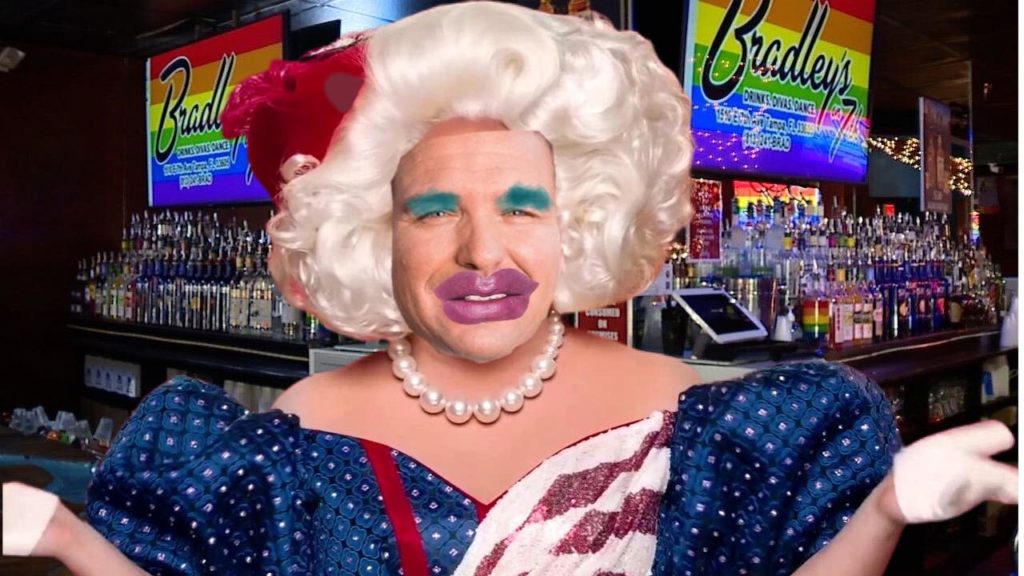 Rhonda Santis, a drag performer who recently moved to Tampa from Tallahassee, is packing in crowds at drag shows all over the Tampa Bay Area.

“There’s something familiar about her but I can’t put my finger on it,” said legendary local drag queen Amy DeMilo. “But I don’t think I’d like to.”

“She’s really filthy. In fact, I’d say downright obscene. She does things I would never do in my act,” said another local legend Jocelyn Summers. “Not so much sexually, but with lots of racism and homophobia, which are elements you typically wouldn’t ever expect to find in a drag show. It’s kind of confusing but it’s a unique act for sure.”

Miss Santis closes her show by turning her back to the crowd, hiking up her dress, spreading her legs wide while twirling sparklers and proclaiming “FLORIDA IS OPEN FOR BUSINESS Y’ALL!! Get it? It’s my butt. My butt is Florida.” Audiences go wild and throw handfuls of dollar bills at her.

“I don’t know that I’ve ever seen a drag performer wearing a MAGA hat unironically,” added Gia Banks, yet another great local drag performer. “Or at all, for that matter.”

Local clubs are booking Miss Santis because she’s bringing in huge crowds of people, most of whom are newcomers.

“These are heavy-drinking, hard-partying people who would normally never be caught dead in our bar or at a drag show,” said Brad Lee, who owns Bradley’s on 7th Avenue in Ybor City. “I know that for a fact because some of them told me exactly that when they were beating me up in the alley after a show the other night.”

“Which is fine because those are people who want to beat me up all the time anyway, but now I have their money, so whatever,” he added.